Phebe's has decided to close for now 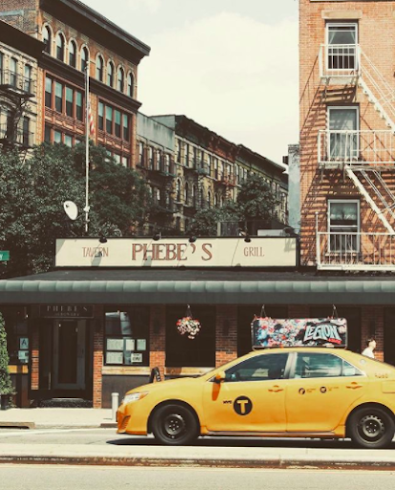 Management at Phebe's Tavern & Grill announced yesterday that the corner spot on the Bowery and Fourth Street is temporarily closing.
Here's part of their message on Instagram:

Due to the restrictions in New York City regarding hospitality and with the growing number of positive Covid-19 cases Phebe’s has made the tough decision to temporarily close our doors. We will miss you all, and keep you posted about reopening dates.
Have a happy and safe holiday! We will see you soon.

Given the holiday wishes, it's likely that Phebe's won't be open again until some time after the New Year.
Phebe's reopened in June for outdoor dining, with ample space on both the Fourth Street and Bowery sides of the business (though of late there has been some underground work going on right out front) ... and then the 25-percent indoor seating once that was OK'd in late September.
A Phebe's has been here since 1968. The bar-restaurant is now owned by the same group behind Linen Hall and the Penny Farthing on Third Avenue.
Several other restaurants have decided to preemptively suspend service before any possible new PAUSE order coming from Gov. Cuomo. A few weeks back, some of the restaurants in Danny Meyer Union Square Hospitality Group closed for indoor and outdoor dining.
Photo from May via Instagram.
Posted by Grieve at 5:00 AM

@Ronnie - yes! Phebe's was a great spot for a casual breakfast or lunch. I mostly stopped going after the atmosphere changed, but it was still good for a burger at quiet times. I hope they're able to return. This being a corner lot, I dread thinking what could take its place.

NYC is in a retail-hospitality death spiral. DeBlasio and Cuomo have written the book: "How To Destroy A Vibrant Economy, Create Massive Unemployment And A Burgeoning Homeless Population In 11 Months While Blaming It On The Fed".

I feel for the employees at these restaurants. The kitchens are tiny and they are all jammed in there making food and grabbing plates to take out. Even with masks it isn't safe. It isn't possible to social distance. I don't get how the city can allow restaurants to be open. I wish they would pay everyone so we could have a longer shutdown. I would love to see the numbers on how many restaurant workers are sick with the virus.

Also I've wondered for 20 years... is it pronounced FEE BEES or FEEBS?

Yeah maybe because the "feds", meaning trump, are the real cause of all of that. But can't wait to read your book.

In the 70's it was known as the Sardi's of Off-Off Broadway.