New restaurants for this stretch of 4th Street 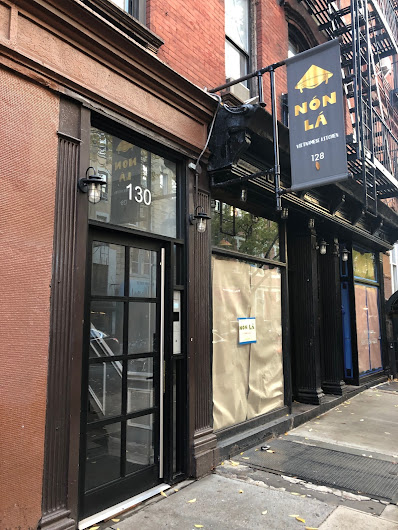 In late October we told you that Nón Lá Vietnamese Kitchen is coming soon to 128 E. Fourth St. between First Avenue and Second Avenue. A new sign now hangs over the doorway.
This venture is from Ronny Nguyen, who runs Sao Mai on First Avenue. We were told that his son will be operating Nón Lá.
The space was home to Lui's Thai Food. As previously reported, chef-owner Pimnapa "Lek" Sunthatkolkarn had to retire her business after being hospitalized late in the summer.
Meanwhile... right next door... at the former Bali Kitchen space... 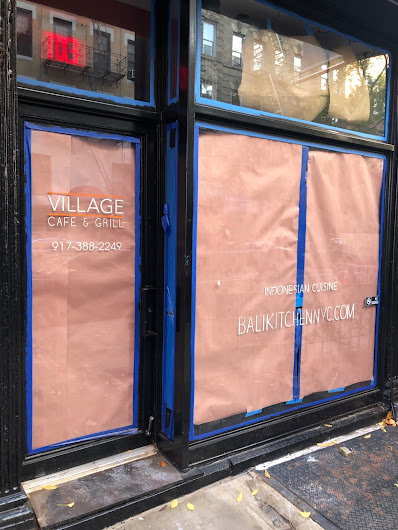 ... new lettering on the door reads Village Cafe & Grill. There's a menu posted for the establishment at Seamless, and it's extensive, featuring everything from bagels to burritos to burgers... not to mention a variety of wraps, sandwiches and salads. Not sure who's behind the venture at this moment.
The excellent Bali Kitchen closed on Aug. 1 after business plummeted during the pandemic. The Indonesian restaurant opened in September 2017. Owners Jazz Pasay and David Prettyman were hoping to continue a catering business as well as other pop-up ventures.
Posted by Grieve at 5:00 AM

wasn’t the Bali Kitchen location where the long ago Pirisi Bakery used to be located, they had the most amazing pistachio cupcakes

The loss of Bali Kitchen still breaks my heart.

Not to be confused with Mott St stalwart Parisi bakery. Yes - Pinisi had a location here and also on 1st Avenue near 2nd St. I think both locations closed about ten years ago with the 4th St location surviving a bit longer.

yes, I used to frequent both locations

RIP Bali Kitchen and Luis Thai
You are missed.