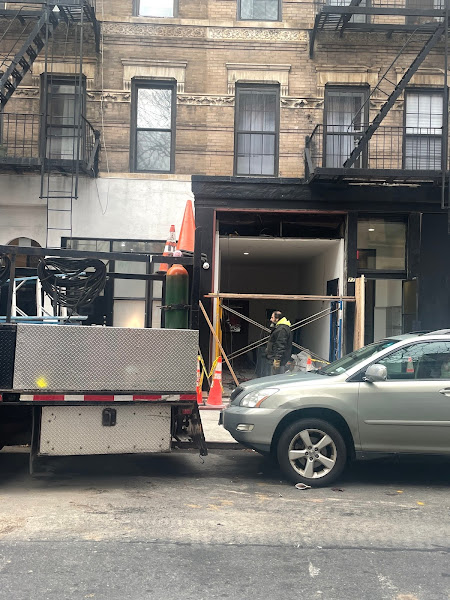 Been meaning to note the work in the new retail spaces at 77 E. Third St. between First Avenue and Second Avenue. (Thanks, Erin, for the photo!)
This is happening on the ground floor of the former Hells Angels HQ — where members had their clubhouse/bar. As we've been reporting, the 6-story building underwent a gut renovation in the past 18 months. In total, there are 22 units here. (The available apartments have a monthly ask in the $4k range — that's for a studio, per the listings at Better Living Properties.)
In June 2019, real-estate investor Nathan Blatter — the new owner of the building — had some ideas for the storefronts here. As he told the Post: "Blatter said he has been contacted by someone curating a Hells Angels museum, and another about a barbershop." He later flipped the building to Better Living Properties. No word on what might be in the mix now.
The last of the members and/or their entourage moved out of No. 77 at the end of March 2019 from the clubhouse that the Hells Angels had in their possession since 1969. They reportedly ended up in Throggs Neck, a neighborhood in the southeastern portion of the Bronx.
Previously on EV Grieve:
• Photo exclusive: Take a look inside the former Hells Angels clubhouse on 3rd Street
Posted by Grieve at 5:01 AM

There are so many empty retail spaces on the LES, who would be foolish enough to create another?

Another one of those stupid glass fronts that looks like midtown

Save for anti-theft/vandalism reasons, I would think retailers would want glass windows to show off their wares. IDK, call me crazy.