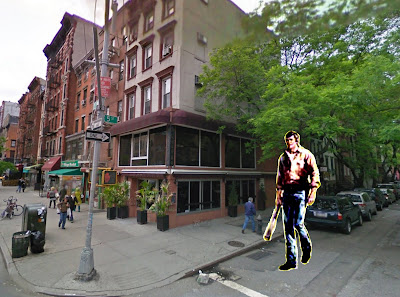 In early August, residents met Sin Sin's management to voice concerns about ongoing issues with the club at Second Avenue and Fifth Street. The meeting didn't seem to go so well. Per a summary of the meeting provided by the East Fifth Street Block Association:

Sin Sin owner Philip [Quilter] seemed unable to muster any kind of serious commitment to dealing with these problems. He did say he would hire an additional bouncer, but only when pressed. His attitude waffled between saying that Sin Sin takes every reasonable measure to ensure quiet ... to denying that Sin Sin was even responsible for the behavior on the street.

He was promptly told that most everyone in the room has personally witnessed the mayhem emanate from Sin Sin. ... We left the ball in his court, asking him to write out his proposal to remediate the problem, asking him to specifically address security and patrons loitering on the street, and to look at his programming to see if changes could be made there.

Tragedy struck several weeks later when 37-year-old Devin Thompson was shot twice on Second Avenue outside the club on Aug. 22. He died from his wounds on Aug. 31. According to reports, Thompson and the two men police believe are responsible for the shooting were inside the club earlier in the evening on Aug. 22.

Relations between neighbors and the club may just be beyond repair now. In an e-mail to residents dated Aug. 25, Quilter wrote that some of the DJs that the club had hired to play weekend nights had been fired. He continued: "Since that meeting on the 4th, I have personally addressed your concerns and conveyed our ideas on how to better meet your requests with all the personnel at several staff meetings. Also, I have implemented and am enforcing a stricter door policy, I am personally monitoring all our patron's parties including bachelorette, birthdays, etc, at the location and as a result, I believe, the programming of the venue has improved dramatically in just a few short weeks." He also said that Sin Sin was cooperating with police in their investigation.

And how did this go over? Here is the response sent on Friday from Stuart Zamsky, president of the East Fifth Street Block Association:

Thank you for your response. We did, however ask that you give us specific information regarding former and present programmers, DJs or promoters responsible for the various nights at your club, which you refuse to present to us. And, though you would not give any detailed information, when pressed to respond you asked that we “believe you”, that the persons responsible for drawing the violent crowd to your club had been dismissed after our August 4th meeting. In the interim, your patrons have escalated the violence to murdering someone in our streets.

Sir, we do not believe you. Not a word that you say. And, as we said at the meeting on the 4th we have no desire to talk to you or to listen to your hollow promises. Do you think that we do not have eyes and ears? We see the same problematic clientele patronizing your club as before. We are looking for action, and until action is taken, and you begin to court a clientele who is not violent, you will continue to be viewed as a scourge on our otherwise peaceful neighborhood. And, the neighborhood will not rest until you are gone and Sin Sin’s license is revoked.

Meanwhile, next Tuesday, the Block Association is distributing flyers for the Ninth Precinct Community Counsel meeting. 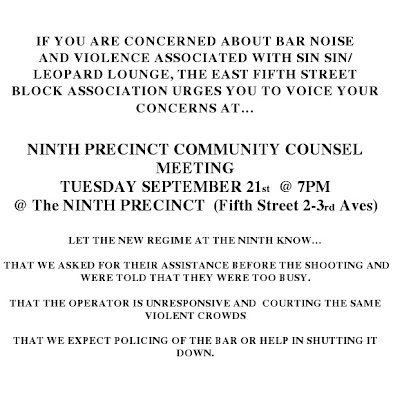 Why the president of the East Fifth Street Block Association carries a baseball bat
Posted by Grieve at 7:00 AM

i think they are used to going to the jasa building for the sla committee meetings (5th street & 3rd avenue), technicallly 2-3 avenues. also the 5th street block association blocks.

residents are probably regretting the fact that they didnt ditch the current owners for new ones in August when they had the chance...

Yeah I know those guys and they are pretty cool.