[Updated 10:46 a.m.] Other news outlets are reporting that five people were injured in the accident. Earlier, WPIX had reported a fatality in the accident. CBS 2 and the Daily News are reporting five injuries: two cyclists, the cab driver and his passenger; and a 71-year-old man who was inside the Bean. Meanwhile, police are working to determine who is to blame for the accident.

The taxi was heading north on First Ave. when it collided with the Jeep, which was turning onto the avenue from E. 3rd St., police said. The taxi jumped the curb, hitting and injuring two bicyclists before smashing into the coffee shop.


According to reports, an out-of-control cab jumped onto the sidewalk early this morning and slammed into a group of six people, killing one, according to WPIX.

The cab careened into a crowd of people standing in front of the Bean Coffee Shop on First Avenue at Third Street around 1:30 a.m.

Five other people were also injured and were taken to Bellevue Hospital. The extent of their injuries is not yet known, WPIX reports.

The driver was transporting a passenger when the accident occurred.

The images below were taken by Vautrin and Stacie Joy, who were returning from a photo shoot at the time of the accident. Stacie told me they tried to help comfort those who were injured before EMS crews arrived. 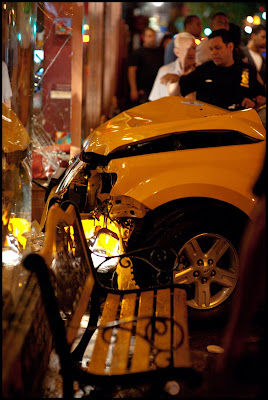 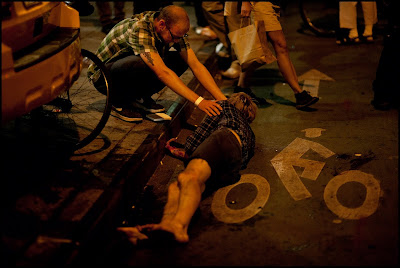 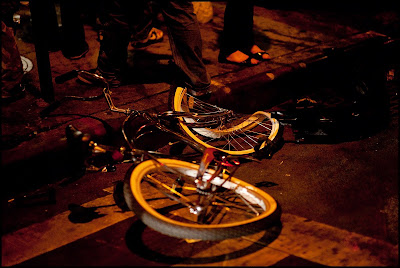 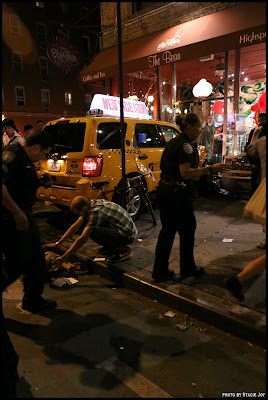 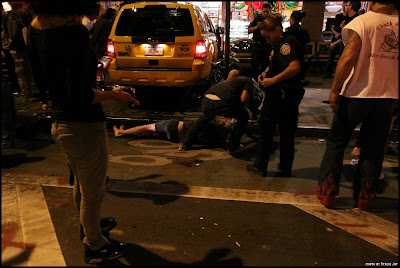 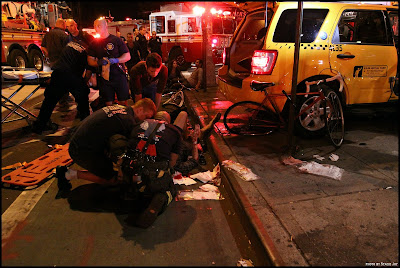 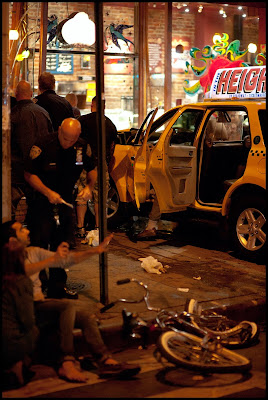 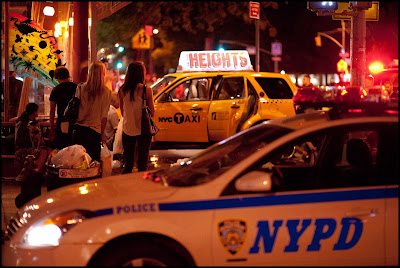 A reader notes that the cab struck a cyclist, pinning the person under the vehicle.
Posted by Grieve at 10:45 AM

As of 9am Sunday NY1 is saying there were five injuries but no deaths. They say three bystanders, the cab driver and his passenger were taken to hospital, and one bystander is is critical condition

did the new "traffic lanes" have anything to do with the accident?

I'm wondering if the traffic island helped slow down the cab.... otherwise, I think it could have been even worse than it was...

"Several witnesses noted that the area had been rife with accidents, with one claiming at least four had occurred in the past month because of a new street configuration."

"In the meantime, the First Avenue lane remains lawless mayhem. Without a little bit of education and enforcement, this non-intuitive layout isn’t significantly better or safer than any other bike lane configuration in New York City."

Those poor people! If anyone knows them, please post a comment and let us know how they are doing.

First and Second Avenue are a nightmare to navigate, walking or driving.

Between the 8 million people on bikes, the drivers who don't understand why there is a line of parked cars in the middle of the street, and the pedestrians who lack any type of peripheral vision, the whole area is incredibly and needlessly dangerous now.

This is terrible. Hope everyone is OK.

I ran into someone who claims to have witnessed the accident and said that the Jeep was at fault (the driver made a right on red into the path of the cab).

the new street configuration probably saved lives, but I'm not shocked to see people try to use this tragedy to prop up their pre-existing opinions.

Bean is on the corner. Unfortunately, there is no longer a curb full of parked cars protecting the pedestrians and storefronts. This type of accident will be more and more common with this new configuration, which leaves everyone a sitting duck as they walk the sidewalks.

More than likely, the SUV going west on 3rd street was trying to beat a changing light, and the cab was flying up First Avenue, hitting each intersection as they just changed to green. That's how accidents happen. Nothing new, except now there's nothing to protect us.

Our incompetent DOT commissioner should resign before there's more blood on her hands.

That is probably the most amazingly complex and retarded logic ever formulated. Congratulations.

Keep drinking the KoolAid dude. There's chaos on our streets, and carnage will follow. I'm out there too. I see what's happening. Your pro bike agenda doesn't seem to have room for the safety of the general public, and if anyone's logic is retarded, it's yours.

cars never killed people on 1st ave until they changed the way the street is configured?

I'm sorry, how does putting the bike line in between the curb and the parking mean that there is no longer a line of parked cars "protecting" the sidewalk (and pedestrians) from this kind of thing?

How do you figure a driver turning right onto 1st would be confused by a reconfiguration of the lane farthest from him? And since when were parking spaces (that aren't guaranteed to be filled, that are off-limits to parking much of the time and that are still, for the most part, there, just pushed out a few feet to allow for a bike lane) meant to serve as a protective membrane to guard against freak accidents?

Come on. The data strongly suggests that increased bike ridership is having a positive effect on safety for all parties and that bike lanes will speed that effect (in part, by slowing traffic). Trying to twist a tragedy to further your weird grudge against a mode of transportation is an exercise in Fox News logic, not to mention more than a little tacky.

Oh wow, look at the crazy bike lane over there! That will definitely cause me to drive like an asshole 80 feet away!

Oh yeah, the problem is people driving poorly. Or will later reports show that the two bicyclists actually caused the cab to come flying towards them and smash into the coffee shop?

Actually, on further thought, let's get rid of the new bus lane. The bike lane, and the sidewalks. It's all too confusing for drivers. Red lights are kind of confusing also...

The speed limit in Manhattan is, at maximum, 35mph. Blatant disregard for that law, and not pedestrian or cyclist behavior, or even a brand-new street configuration, is the primary cause of most accidents. I would bet it was the cause of this one as well.

@Mike S: Actually, the speed limit is 30 mph citywide. It's posted all over the city. And it seems like barely any New York City drivers know that.

Without enforcement, speed limits, bike lanes, and any other efforts to control traffic in NYC (or anywhere) are meaningless and will be ignored.

In assessing blame, one needs to look at the NYPD, which is practically non-existent in enforcing traffic laws in NYC.

Anon: You pro-car agenda is killing 44,000 people per year. Safety? Speeding cars have NO place in cities. Operators of large machinery need to have their attitudes rectified.

It'll be ironic that all those little Vietnamese kids will be working their asses off making Nikes for New Yorkers who'll be wearing them out at the rate of a pair a week after Bloomturd and the bike Nazi's vision is complete.

Love that this shit is all going down at the hand of a billionaire who travels by helicopter and private jet. If there were any REAL New Yorkers left, they'd likely not fall for all this bullshit.

Yeah, get rid of the bike lanes, bus lanes, sidewalks, do away with all the traffic controls: all this stuff is way too confusing for drivers who can barely keep their cars straight. There is way too much stuff happening on the roads for an average driver to deal with.

I'm sure this cab driver would have not caused this accident if all the above distractions were removed out of his way.

I hope his DL gets suspended and he gets jail time under the new laws that just passed. And he should be never allowed to drive a cab in his life again.

Your pictures are worth a thousand words. This accident is shocking. Sorry you had to go through this.