Back in November, we pointed out the pounding noise coming from the construction site at 185-193 Avenue B... where workers are putting in the foundation for the new apartment complex at East 12th Street.

Per a resident adjacent to the space:

That construction at Ave B and 12th has become the bane of the neighborhood. The vibrations and shaking from it are endangering the old buildings nearby. The noise is unbearable. Why isn't there an uproar in protest from the local residents and merchants? Has the EV become a neighborhood of sheep? 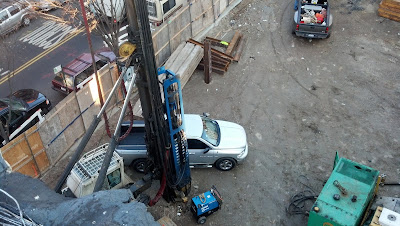 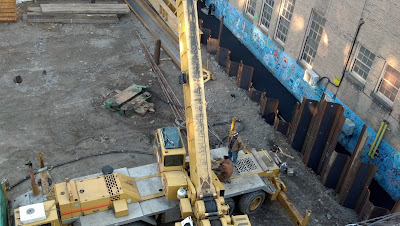 According to one complaint to the DOB:

"Pile driving is shaking old buildings nearby; this new construction is set up to do a lot more of this; it is unnecessary and inappropriate construction technique for this old neighborhood."

Apparently the DOB finally took notice, issuing a Full Stop Order on Dec. 18 ... the site remains shut down several weeks later. A DOB inspector found a "vertical crack between buildings 181/183 Avenue B" directly next door to the site, per DOB paperwork.

In addition, the inspector didn't notice "a flagman" when deliveries were being made at the site ... this is especially troublesome given its proximity to the school next door.

The Specific Violation Condition(s) and Remedy via the DOB website:
FAILURE TO SAFEGUARD ALL PERSONS AND PROPERTY AFFECTED BY CONSTRUCTION OPERATIONS.

There's a hearing on the matter scheduled for Feb. 7. Meanwhile, some neighbors are enjoying the construction-free days. "That was like Christmas coming early," said one resident of the Stop Work Order. 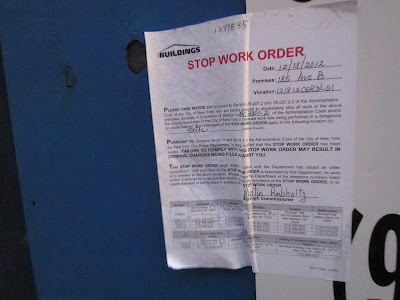 7-story building in the works to replace former countercultural theater/church on Avenue B
Posted by Grieve at 6:35 AM

Email ThisBlogThis!Share to TwitterShare to FacebookShare to Pinterest
Labels: 185-193 Avenue B

My son attends the school next to this site and the noise is insane. His entire classroom shakes when they are pile driving and the teachers have to shout to be heard. I complained to the construction manager, who told me even he didn't understand why the city was permitting them to build during school hours, but "ours not to reason why..."

These developers are fucking insane.
Do any of them have ay regard or concern for the neighborhoods they go to?
Construction makes noise, yeah, but you can't just throw a fucking skyscraper anywhere you want.

The city doesn't give a damn what new construction does to old buildings and the tenants in them. Look at the hotel on Bowery and Hester: It took two tenements out during construction and there's an ongoing fight over compensation. I'd be real nervous if I lived in adjacent lots.