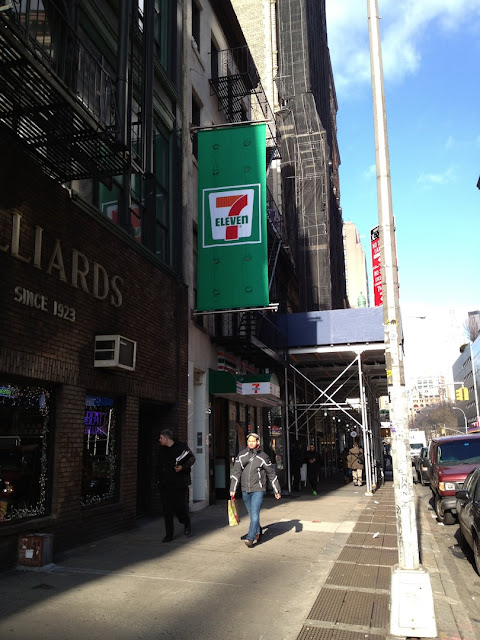 [On Broadway near East 12th Street, via CP]

In case you missed it... there was a Marketplace Morning Report on Friday about 7-Eleven's plans to destroy humanity expand in Manhattan...

A few highlights from the report:

Lots of places sold those commodities and 7-Eleven couldn’t compete. The company closed its few Manhattan stores in the early 80s. But now, it wants to grow, and fast, and New York is 7-Eleven's number one priority.

“Where are we not where we could be the fastest and have the most number of stores?” Barnes says.

Within five years, 7-Eleven could be nearly as ubiquitous in Manhattan as Starbucks. The company plans to open at least 30 new stores a year.

“I don’t know. I don’t know why they do that to me?” he says as he stands in the corner deli in Chelsea he’s owned for years.

After 7-Eleven opened next door recently, his sales are down 25 percent.

Thanks to EVG regular Andrew Adam Newman on Ave C for the link.

Previously on EV Grieve:
7-Eleven continues to feast on the East Village; next up, St. Mark's Place

[Updated] More from the anti-7-Eleven front on Avenue A and East 11th Street
Posted by Grieve at 9:19 AM

Email ThisBlogThis!Share to TwitterShare to FacebookShare to Pinterest
Labels: 7-Eleve

Thank you for the link -- I heard that report yesterday morning and was annoyed that the reporter neglected to mention the organized resistance going on over here. Will be firing off an email!

I walk by the 14th St 7-11 all the time and it's always empty. Not surprising, it looks about as appealing as an ICU in there.

Generally speaking I'm not all that opposed to a 7-11 on the corner. I won't shop there & figure they'll go out of business. Maybe it's just that I'm more observant now because of the resistance to the one on 11th & A but I saw at least a half dozen 7-11s walking to 23rd St from 11th. A store here & there I'm OK with but there really does need to be legislation to limit how many that can have in an area. All they have is cigarettes, soda & chips. Not exactly a benefit to the community.

Tourists and students, that sounds about right, EV...in search of the familiar in big scary old NYC. I'm not sold that 7-11's are gonna fly in established NYC neighborhoods with fewer transients.

7-11's ugly strategy, like Duane Reade, is to conduct trench warfare in NYC with already established mom and pops. 7-11 thinks their supply chain gives them a step up, but I still think it'll be a competitive stalemate, with 7-11 trying to slowly wear down opposing stores. Hopefully, deli, newstand, and bodega owners have trade associations to help provide a counter-attack.

Until the idea of regulating chains in NYC takes hold, some kind of organized boycott might be in order.

Remember that the Quizno's on St. Marks failed after about a year. Maybe some of the 7-11s will suffer the same fate.

The 7-11s sure aren't passing along any of their volume/supply chain advantages along in the form of lower prices. I thought they'd go that route, but nope.

@BT -- don't quote me but rather than offering volume/supply chain advantages, I think the 7/11 corp is offering waivers of certain franchise fees to help nudge along local shops - I guess whatever they can do to get their feet in the nyc door.

Not trench warfare, more like saturation bombing. That's what Starbucks did. A bunch of Starbucks are out of business - two that were on Cooper Sq., for example, but the company was willing to take those casulties in order to gain market share. Probably even more the case for 7-11's, since those are franchized, and the home office doesn't have to care so much if their individual stores make it or not. Even their losses will damage their competition.

This is all very ugly, and so are the creatures who shop there.

I've been on the one on 14th several times. Always packed with regular people, so I have no idea what time the ones who have said they'd walked past and it's empty. One also opened here in Sheepshead Bay Brooklyn and it's doing a bang up business.

A number of Subways have closed too. Good riddance. I wouldn't step foot into a 7-Eleven. Their corporate offices are in Texas. After 8 years Bush that's all the Texas I need for a lifetime!

If people feel the need to shop at 7-Eleven then they don't need to live in Manhattan. I hope they go out of business very quickly. This is a very negative force in our city. I agree they look as inviting as an ICU. So ugly. I'll take a bodega any day over that.

Not sure what Anon 1:20 is saying- The vast majority of bodegas are open 24/7 except a random few on residential streets, most of them make real food, like sandwiches and salads not processed shitty nachos and pizza that sat for 5 hours under a heat lamp. They offer lots of things that 7-11 does not and their prices are usually cheaper than 7-11.
It's okay if you love 7-11- I know it makes you feel safe and reminds you of the suburbs, but find a valid reason that holds up to scrutiny next time.

Chains are destroying NYC.
Straight up.