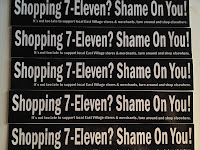 On Wednesday night, members of of the No 7-Eleven group and the 11th Street A-B-C Block Association presented a proposed resolution to CB3's Economic Development Committee to restrict corporate formula stores in the neighborhood through a zoning amendment.

It turns out that Wednesday night was the first time that a community group had brought a resolution to this relatively new committee. Its procedure for this was not entirely in place, and the committee declined to take any action — for now.

Rob Hollander, representing the Block Association and No 7-Eleven group, submitted the resolution and supporting documents several weeks ago. However, the background and documents hadn't been distributed to the committee members.

As Hollander noted, "So members may not have read it in its submitted form and they didn't have any documents to look at during the meeting. As a result, some concerns were raised and discussed that were not contained in the resolution itself."

He said that the resolution is just a way to give all community boards more say in local land use. "It doesn't prescribe what any community board should do about land use, it just allows them to exercise choice," Hollander said.

And for the time spent Wednesday night?

"I don't begrudge the lost time — I enjoyed meeting the members who I didn't already know, it was a pleasure to see again the members that already knew, and presenting is fun," Hollander said. "But we did lose a month. At the very end an important and relevant concern was raised: On what criteria would the Community Board decide up or down on a given corporate store? It seems to me it raises serious legal liabilities of discrimination. So the meeting was not a waste by any means."

Previously on EV Grieve:
[Updated] More from the anti-7-Eleven front on Avenue A and East 11th Street

Email ThisBlogThis!Share to TwitterShare to FacebookShare to Pinterest
Labels: 7-Eleven, CB3, No 7-Eleven

My opinion is that the no 711 group ask CB3 to write a resolution to ask the City Council to create legislation to limit the number of chain stores in a given area. They would likely need to create legislation anyway to give the CBs more authority in land use. Why have CB3 as the middle man ? We'll then be complaining in the future about how the voted on an issue. Have the City COuncil create a law with no loop holes for attorneys to find a way to get around this issue.

WAY. TO. GO. and HATS OFF for fighting the good fight Hollander!!

There is NOTHING other than the integrity of the landlords themselves preventing this whole place from turning into a giant strip mall...

So happy to see this dialogue has begun.

I heard 7-Eleven is offering 50k buyouts to bodega owners. What a soulless, corrupt company.