As you know, there are plans afoot to convert the Congregation Mezritch Synagogue at 415 E. Sixth St. into condos. Why? The historic building in the new landmark district is in bad shape and the congregation has dwindled.

On Wednesday night, CB3's Landmarks Subcommittee heard a proposal about the renovations, which include a penthouse addition and an elevator. (The Synagogue would use space in the upgraded basement's community facility.) Synagogue leaders reportedly signed a 99-year lease with East River Partners worth some $1.2 million.

However, to fit within the guidelines of the newish Lower East Side/East Village Historic District, the rooftop addition (penthouse!) can't be visible from the street.

DNAinfo'a Serena Solomon covered the meeting, and reports that architect Joseph Pell Lombardi said that the addition will not be visible from the street. To prove this, he installed a mock-up with orange cones and stuff showing where the penthouse would be setback from the rest of the building.

"There is a mock-up in place — a bright orange mark — and I would welcome any of you to take a look at," Lombardi said ... Wednesday night, where he spoke in an effort to earn the board's thumbs-up for the addition.

"It's up there now on top of the roof… we worked hard to make sure it wasn't visible."

We took him up on his offer.

Bobby Williams stopped by to see what was what.

Here is the view from East Sixth Street... 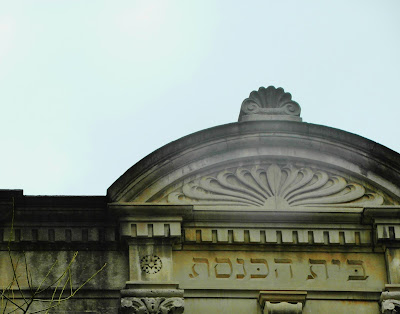 Then Bobby walked about 20 feet to the south onto the Village View property... where the addition was clearly visible from the grounds... and likely even more so from any of the Village View apartments... 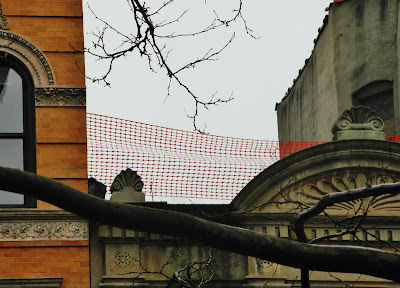 For the record, Serena's photos showed the same thing.

Meanwhile, the committee tabled the discussion for another meeting.

I was at this meeting and was saddened to find dissention among the congregation. The Cantor and one of the readers stood and spoke against this, as did a woman whose parents were married there. According to them, Only the Rabbi and the president of the congregation signed off on this.

Also, what you don't realize is that IN FRONT (of what ever structure goes up) is a rooftop deck! WooHOO! BBQ anyone? But NO CHEESEBURGERS YOU!

Where's the annonymous donor to step up and save this beautiful and historic house of worship?