Demolition day arrived yesterday at the Mary Help of Christians Catholic Church on East 12th Street. Workers are making their way forward as these photos from a variety of residents show.

For part of the day, workers left the gate on Avenue A open, which provided a clear view of the carnage. 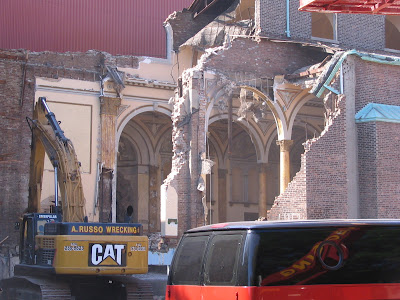 [Via an EV resident]

Reactions were varied. At one moment, standing nearly side by side on Avenue A and East 11th Street, we spotted a woman saying a prayer... and another woman hopping out a cab, frantically searching for Westville East.

The following photos are by Paul DeRienzo, which show the start of the church's demolition... 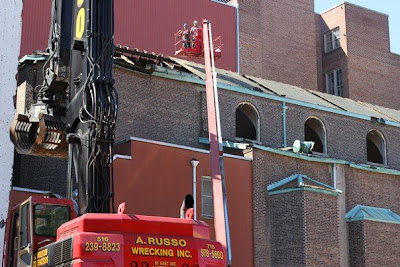 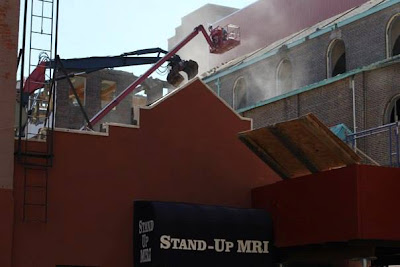 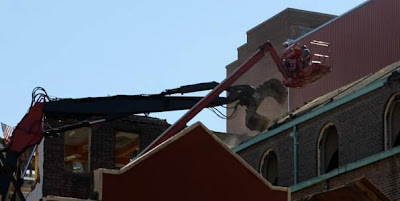 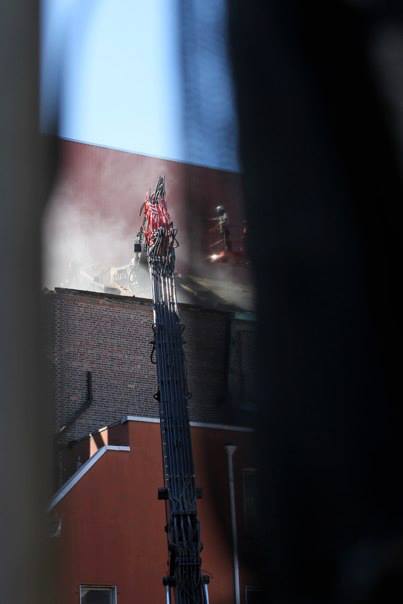 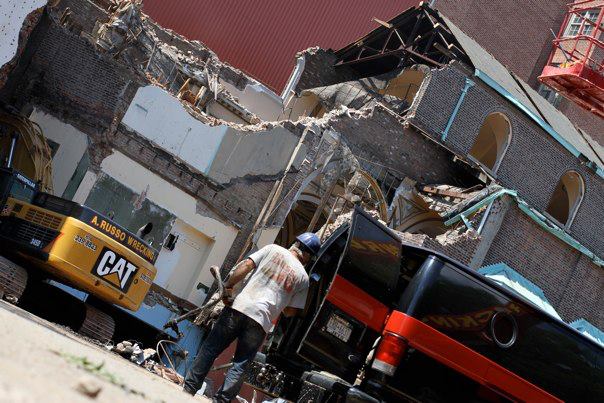 From East 12th Street resident Kym Gomes, who has lived across from the church the past 20 years... 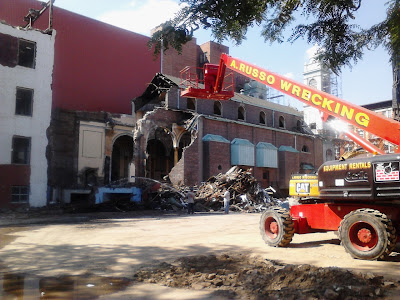 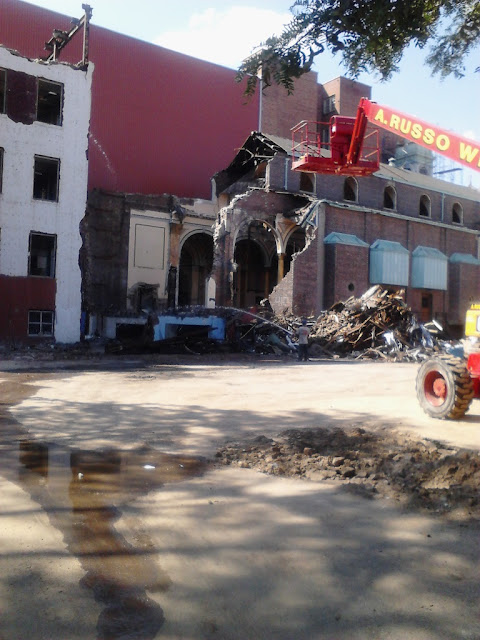 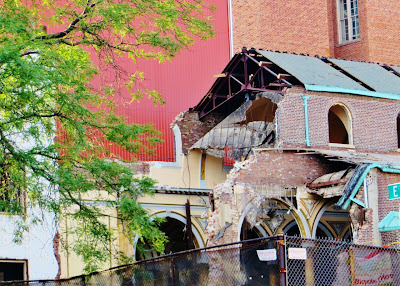 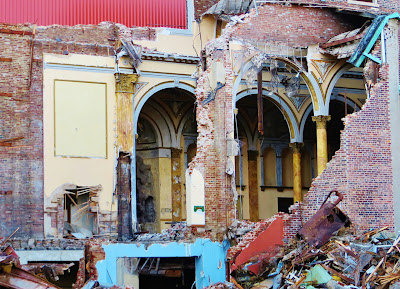 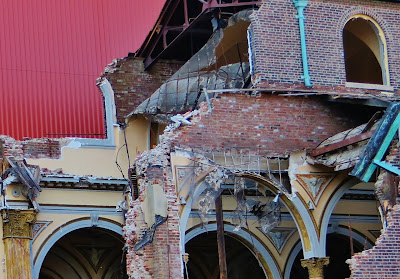 From an East Village resident... 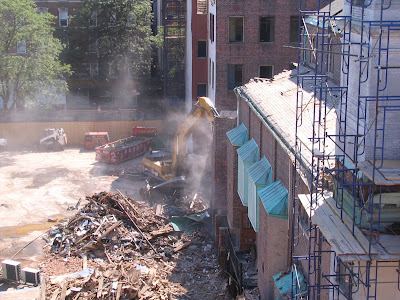 ...workers are also bringing down the former school on East 11th Street... 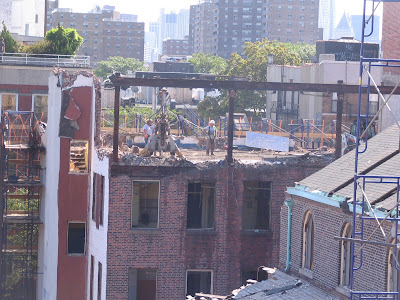 Scaffolding arrives for demolition of Mary Help of Christians
Posted by Grieve at 6:01 AM

So sad about the bulldozing of another anonymous square, glass-clad building said nobody, ever...

"another woman hopping out a cab, frantically searching for Westville East", i.e. not being able to recognize the needs of others or those of her surroundings, like Nero fiddling while Rome burned. Speaks volume of the me generation -- lacks empathy.

Nevermind that this was a place of worship for almost 100 years for middle income, lower income and working class familes...

Oh man. I don't have any affiliation with this church but those photos make me damn sad.

Pretty soon you'll have to rename this blog "EV Grieved" as there won't be anything left to grieve.

So long Mary Help of Christians, I've lived next door to you for over 10 years, and I will miss you.

P.S. I will boycott any and all business/retail that opens here in its place.

Destroy over a hundred years of history to make a playground for the Oveprivlidged.... This neighborhood has become a joke.

This church was my home. I was baptized here, did my communion and confirmation here along with my brothers, sisters, cousins, nieces and nephews. This church is part of my heart and my life. They destroyed it for what? a luxury high rise rental? This church served a real purpose, bringing young and old people closer to God. Saints have walked down the aisle of MHC. Shame on the folks who let this happen. I truly believe there is a special place in hell for that group.

Duh..people wishing to hell are the Cardinal and Archdiocese of New York that sold it..perhaps for good reason the money was needed elsewhere? So ask the question before the condemnation.

@Anon 12:20 - I am perfectly willing to damn the Cardinal, Archdiocese, Pope, and any other Catholic figurehead to Hell for allowing this to happen - and I speak as a lapsed Catholic who left the Church in large part because of how monstrous it has become. That its minions could actively destroy the old, beloved buildings that played such an important part in the lives of people and neighborhoods, that they so carelessly and without a thought rend and shatter the local fabric of the streets, of which these seemingly-immutable buildings have so long been a part, and all in the name of the avarice they are supposed to shun - then yes, damn them to Hell, and I mean that with all my heart. That church, built with love and care, faithfully performed its task for almost a century, doing precisely what was asked of it. And as a reward, when someone high up and with no skin in the game decides its life is over, its purpose subverted because yet more morons are in need of luxury housing and twee stores and more places to drink, it is simply torn asunder and carted off to a garbage dump. And you don't think the rapacious Captains of the Church deserve damnation for that? Hell is too good for them.

So sad..i live across the street from this beautiful building it was such a joy to look out to..i cant believe the city has allowed this demolition of a landmark..what are we doing to ny?

Some of these photos look like something out of ancient Rome...........

Sad - very sad to look at these photos. I, too, have no affiliation with this church but feel for the people who have a connection with this place of worship. I am not religious but love the architecture and calm that these sanctuaries provide - especially in the city of noise. It is amazing to me that you can step off a street like Fifth Ave in midtown and be engulfed in silence and calm immediately. All churches and temples have this quality - they are special places. There can be no good mojo in the footprint of this destruction of such a wonderful tranquil place...

Civil societies even in war times enter into agreements not to destroy each others sacred spaces.

This feels disgusting like Edison electricuting an elephant to try and demonstrate progress.

And all the here and now lovers of development: What one does not wax poetic over Grand Centrals stary ceiling? or drag thier out of town relations to the fabulous Construction of dear Penn station. Go stand square legged in the middle of that and crow.

I posted earlier but must add this.. all the Vatican has to do is sell ONE painting or gold-leaf, bejeweled bauble and all the old churches in this town could be saved. Ridiculous!

It always ticks me off that the Vatican could end all the hunger of their parishioners in 'third world' and 'developing' countries if they just sold their damn art collection. !!!

I have been wondering why I care so much about a church, as someone who does not give much credence to churches or their ilk, but I realize that what bothers me so much is the destruction of a beautiful public space for a (likely not beautiful) private one.

However I do have a relationship with the copper domes, as I've spent countless hours gazing at them across the rooftops from the serenity of my bathroom window.

the exterior wasn't particularly inviting but the interior was wonderful. Not an absolute jewel in the artistic sense, but a very handsome relief from the sameness of what we're often surrounded by. The exposure of those beautiful arches and pillars in these photos really ought to give one pause in much the way the destruction of Penn Station did. This is vandalism. So very sad.

I agree with VH McKenzie. This is so very very sad.

So sad, sends chills all over my body. Me, my sister, cousin, brother, nephew, friends all went to this school from prek-8th grade. We made life f riends here, we baptized our children here. We graduated, did our holy communion, and confirmation there in that church. There is so much history, and sadness, and beautiful moments experienced in that school and church. It amazes me how they can tear down a historic site. :-(

A friend in Philly said...

My deepest sympathies for all the parishioners devastated by this desecration ... These cold and heartless actions are gutting the very core of the Church in this country ... God help us ...

Oh what have they done to you,my
Dear Mother,Mary,The Help of Christians and of ALL who come to her for solace?? They have desecrated your Holy Sanctuary and
laid it to waste in the gutter!!We
have the archdiocese of NY to thank
for this unspeakable indignity,as
well as the "decision makers" within the Salesian Order,who stood
by and did nothing while this vile
rape and plunder was executed.
It was Jesus Himself,who said at The time of His passion,that "he
by which The Son of Man" is betrayed is guilty of the greater
sin;better for him if he had never
been born". I myself would propose
that it would have been better if
certain "men of the cloth" had in-
deed never have become priests,and
bishops,and cardinals,if they were
to utimately be the unfortunate
vehicle by which Our Lord and His
Blessed Mother would suffer further
betrayal and desecration!!
With this week's ignominous
events,not only has a beautiful and
exquisite church been mercilessly
destroyed,but the people of God have been betrayed by those whose
charge it was to defend them,and to
protect our holy patrimony for fur-
ther generations. My beloved late
Uncle,Mr. Andrew Avolio,was correct
when he told me years ago,that the
"abomination of desolation" would
afflict Holy Mother Church,as soon
as the altar rails were removed,and
the "Novus Ordo" ran amuck. Perhaps
this demolition,may have begun long
ago. My Uncle was also the cook at
this rectory,for twenty-five years!
May God help us all in these
dark days,and may we receive the
strength to march on in faith,to
"rebuild The House of The Lord" in
our hearts and souls. Mary Help of
Christians Church,we will forever
love you and hold you dear;you will
live on forever!!Valentino V.Oliveri/New York City

This turned my stomach. I grew up in this church, there a few like it left in this area with the same teachings. I also went to the school, wonderful memories. So sickeningly sad.

I grew up on Ave A and went to the church and school with my brothers and sister. I feel sick to my stomach seeing the demolition of such a beautiful church. Was baptized and received communi
on in the church. Breaks my heart.

The destruction of my home parish still haunts me and hurts me tremendously. I know many of the people involved in the church have moved on. It's very hard for me to see an UGLY condo in place of what was once my beautiful church. It was the wrong thing to do. I may never get over it. It was such a wonderful place. I have great memories of it. To me it was the best church in the world. I felt as if other churches in the are were a bit jealous of it not only because of it's beauty but because it was truly a sanctuary of peace.
Rest in peace, Mary Help of Christians Church. I will not ever forget you.