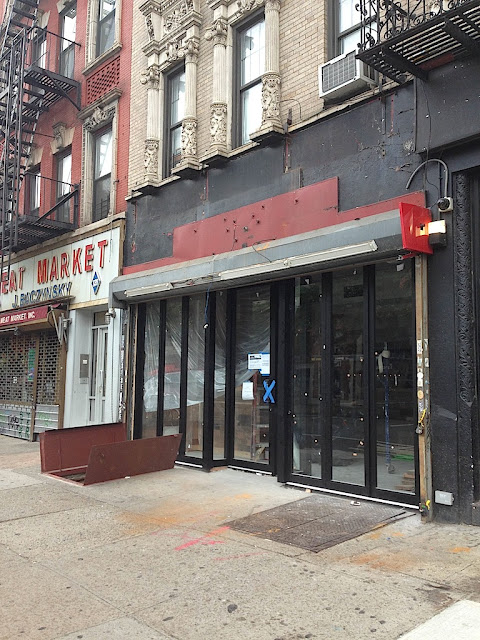 Work continues at 141 Second Ave. near East Ninth Street where Otto's Tacos will be opening soon... this week, the workers removed the signage of the previous occupant — the short-lived Good Guys.

We asked proprietor Otto Cedeno for more details on his restaurant.

"This project has been a year-plus in the making and I'm humbled beyond belief to have a restaurant amongst all the greats in the East Village. I'm originally from Orange County, Calif., and the genesis of this concept was to put the food I grew up with in a city that's now turned into home for me," he said. "I've been an on/off East Village resident for the last 10 years, and couldn't think of a better area to open my first restaurant."

"We have a very simple and focused menu that allows us to spend time and flavor on each item ... we're keeping everything from the brand to the buildout to the menu simple. We want our customers to feel comfortable and right at home ... [and have] a fantastic dining experience in a grab-and-go atmosphere."

"This is my first restaurant, actually. Prior to this I was the director of production and operations at Livestream.com. My background is film production and tech. This was a lifelong dream of mine to do and thought, 'I'm alive now, who knows if I will be later, let's just go for it.'
We are beyond excited to open."

Cedeno is planning for a mid-September opening. CB3 approved a beer license for Otto's last month.
Posted by Grieve at 5:35 AM

Wasn't there a Taco place in that area just a few months ago?

Tacos are the new frozen yogurt

There seems to be a bit of a taco boom in nyc right now. That's cool -- I'm always happy to have a delicious taco. Fish, plz! Good luck to Otto.

I'm pretty excited about this. Love Taco's and hope it's delicious.

To Uncle Waltie's comment: Yes- Taqueria Diana opened a month ago one block down- also a CA transplant. It's turning into little Mexico down there...

Rumor is they did a tasting recently and the food was AWESOME. Looking forward to getting in the door.

Another California person opening tacos A BLOCK AWAY. C'mon son. Spread it out or make a taco spot in your hometown.

Just because its "Mexican" doesn't mean its Mexican Food I think NYC has plenty of tex mex / americanized over-loaded burritos. So a simple high quality taco sounds pretty damn good. Being from LA I can tell you that NYC hasn't seen a lot of great mexican food so I'm excited. Plus kudos for chasing a dream.

Such a relief to see that tacky blue and red Good Guys signage removed! And another locally owned taco place... Yummeee! Been going back and forth between the quesadillas at Morales and the roast chicken at Diana. Did someone say "burritos at Otto's!?"

Agreed on on good guys signage being gone. Will not miss them.

I ate at the brick and mortar Tacos Morelos (now Cafe Morelos) and was disappointed. The food was not as good as the food made on the cart!

And my friend and I heard the microwave go off a couple of times as we waited for our meal. It was definitely our food (we were the only ones eating there and no deliveries went out during our stay).

A microwave to cook Mexican food? a travesty! Our black beans and rice tasted like they were zapped. And the dough for my dish was too tough and seemed like it was prepared hours earlier.

We were hoping the food would be great (like the cart) but it was not. I pull for them because I want them to be a success. They have to COOK the food though, not microwave it!

The best Mexican around, in our opinion, is Sabor A Mexico on 1st Ave between 9th and 10th.

Mole on Allen (just below Houston) is pretty darn good.

I called the restaurant after we ate our delivered food. It was so good, I had to call and say we loved our meal.

The guy who answered was totally caught off guard, it was pretty funny!