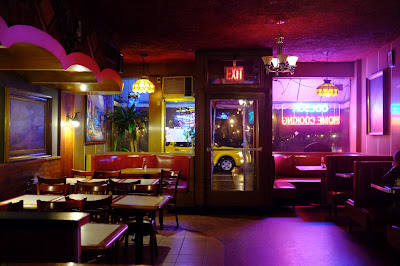 Reliable sources pass along word that the Odessa Cafe and Bar at 117 Avenue A will now remain open through Sept. 6. The Odessa was originally set to close after service this coming Tuesday night ... and eventually become a "a full-service American brasserie restaurant," according to CB3 records.

The closure of Odessa Cafe and Bar will not impact the newer Odessa next door at 119 Avenue A, though we hear that the restaurant will have more of a bar scene later at night.

Reader report: Odessa Cafe closes for good after Aug. 15
Posted by Grieve at 6:05 AM

More of "a bar scene later at night"?

More Buckets of Chunder for everyone!

Are we sure about this? I want to go pay my respects and don't want to miss it.

What happened to Odessa in about 2006, the food went from generally decent diner food to absolute crap, never to recover? It still seemed to be the same guys behind the register so I figured ownership stayed the same, but within 6 months all of the waiters, some who has been there for ages, we're all suddenly gone. Can anyone solve the mystery that has kept so many awake nights, for almost a decade now?

In theory I liked Odessa just being here no matter how grimy or complacent it's become but in reality it's been a horrible, terrible place to step in for many years now.

I've had some of the most miserable meals of my life here, and that's really saying something.

What year did it open?