The Portal of Movement is on the move! 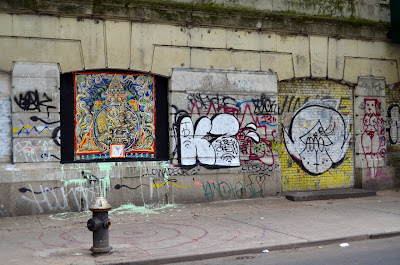 You've been reading about 13 Portals, the interactive street art project that is being unveiled around the East Village this summer. Co-creator Nicolina (along with Pérola Bonfanti) passed along word to us that someone removed (stole?) Portal 3 from outside the former P.S. 64 and CHARAS/El Bohio community center on East 10th Street between Avenue B and Avenue C.

Any idea what happened?

"We have no definitive clues. However, some guy asked if he could buy it while we were installing it," Nicolina told us. "We told him that it was for the street and that it wasn't for sale. I imagine it could be him if he wanted it badly enough, but it could be anyone. Whoever did it was very deliberate because they had to stand up on the ledge and forcefully peel off the canvas, which we glued there with liberal amounts of contact cement." 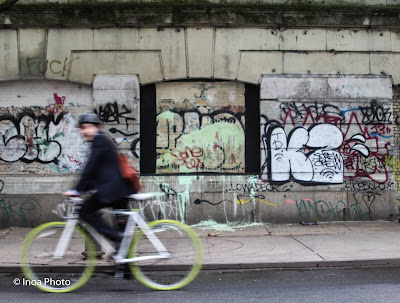 Portal 3, called, oddly enough, the Portal of Movement, will be back. Nicolina says that Patrick Nash at Boxcutter design has agreed to help them by printing out a replacement for Portal 3. The new portal should be up soon.

In February, someone vandalized Portal 1 on Avenue C and East Seventh Street.

Check out the 13 Portals website for more info.
Posted by Grieve at 5:40 AM

Email ThisBlogThis!Share to TwitterShare to FacebookShare to Pinterest
Labels: 13 Portals

First puppets, and now portals - basically anything starting with the letter "P" is up for grabs around here...