Chris Flash let us know that The Shadow has returned... "Our last issue was published EXACTLY five years ago — we'll be publishing every 3-4 months from here on," said Flash, the publisher.

You can find copies of the underground paper, which debuted in 1989, this weekend during the 25th Annual Riot Reunion shows in Tompkins Square Park.

Per Chris: "The Shadow is all about neighbors supporting local businesses that support the community. We need more stores and venues to sell The Shadow." 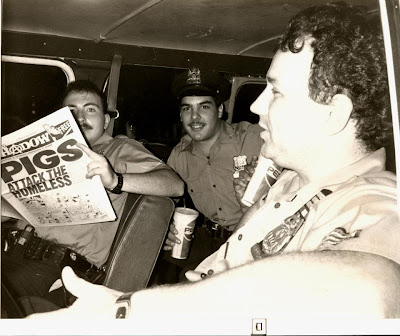 Email ThisBlogThis!Share to TwitterShare to FacebookShare to Pinterest
Labels: the Shadow

Interesting. Will it still be available at Gem Spa?

It's coming to Gem Spa soon....we need MORE neighborhood locations to carry The SHADOW on consignment. Please let us know at: shadowads@yahoo.com.

Always some of the best journalism in the City. Essential. Great to hear its going to return more regularly.

Our two big investigative pieces this issue are: Who Really Runs Cooper Union? and explaining a secret sentencing method called "Terror Enhancement" that results in lifetime jail terms without the need for the govt to go trial to prove that anything illegal has taken place. PLUS killer centerfold art by Seth Tobocman (WW3 Illustrated, and pieces by movement attorneys Norman Siegel and Stanley Cohen.

The SHADOW is back -- with a VENGEANCE!!