About other 'rooftop ragers' in the East Village 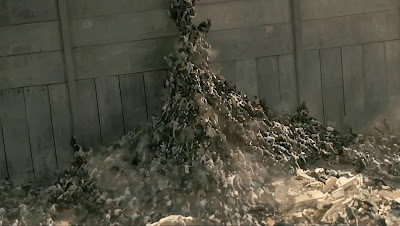 Yesterday's post on the stairwell collapse at 159 Second Ave. that left "30 collegiate partygoers" ("rooftop ragers" per the Daily News) stranded on the roof brought out a lot of comments/emails about other similar rooftop bashes in the neighborhood... maybe to epidemic proportions? Hard to say!

I live on 12th Street, and the NYU kids who lives upstairs had their own rooftop rager a couple of weeks ago. My poor super had to come put a stop to it. He estimated there were 100 kids on the roof of our tenement building. Not only are they disturbing everyone, they are risking their lives.

Our building is old, and I am hardly an engineer, but I doubt our roof was made to hold all that weight. Plus, there aren't any railings, and someone, especially someone who is tipsy, could easily fall over the edge, which is probably about a foot or so high.

Anyway, it sucks for the rest of the us tenants as well as the supers on our block who are basically resident assistants now, forced to get up all hours of the night to babysit these out-of-control children. My building, once full of people who looked out for each other and took care not to disturb each other, is a dorm now, and I don't want to be back in college!

Have any other rooftop rager stories to share? Hit us up!

Set up. Who set up these students, telling them to party on these old roofs, while the fdny, military use directed energy weapons against them.?

Go be crazy somewhere else.

325 East 10th Street. The kids who live there have discovered their roof is a perfect place to continue partying after the bars close, so things get underway around 4:30 AM, sometimes with amplified music. I don't think there's a super in the building, and even tho I call 311 it still takes the NYPD a while to show up. The arrogance of these drunk little shits is amazing, and I keep praying that one will fall off the roof and dash whatever is actually in their miniscule brain pans out on the street below.

You should not have left those anti-government comments. We know exactly who you are and where you are at all times, and now we are coming for you.

I live on B between 13th and 14th. The current landlords aren't great they barely lift a finger to do anything however the rooftop parties managed to get them to put alarm doors to the roof. I've lived here for twenty years and always had access to the roof, in the course of less than a year these fools inspired action from a crappy property management company that hardly does anything! I live on the top floor and while I do miss having access to the roof, I can't help but get enjoyment out of knowing all their weekend party plans have been ruined. I just wonder what shitty TV show has depicted rooftop parties causing all these idiots to have the same idea?

Here's a thought. These buildings were not designed to have "rooftop bashes", dummies.

Since we all basically live in dorms now in the East Village, can we at least get free tuition at NYU?

Yesterday, I noticed that the handrail to the top floor staircase of our building is shaky and partially disconnected from one of its supports. I suppose this has nothing to do with the dozens of partying college students who have been traipsing up and down the stairs in recent weeks... or everything to do with them.

We know who you are, where you are and are coming for you also, as you and your smelly uniforms, and bosses leave for the new mayor.

Ooooooo.... alciada, communist doom bergs of the lost ark, nwo, British empire, cry baby georges that set fires, go for breakfast at 9 metro tech to feed their un american fatso bosses and empoyees, and do nothing but scare american residents, set fires, evacuate, use the red cross, zeroes, not heroes. Hey how bout all those repeater, antenna, transmitter, towers in NYC radiate g your firehouses 24/7, nothing like shrimps on the barbie eh? Wtc, 911 inside job, Rockefeller losers, now with no bosses as they stole the till, and ran away to bermuda, no real homeland insecurity fire dept ops to take out residents any longer. Lol... Bye bye bloomie, doomie.

The realtors promote the rooftops as a benefit. I've seen them showing it off.

In my building their parties end early once they have to deal with crazy roof lady who unplugs their phone from the speaker, yells incoherent threats, accompanied by her machete brandishing husband.

I post anonymously lest the government agents find me and zap me alcaida zombie fatsos.

AVE B + 2ND ST. God that stupid Duane Reade building with the fucking dolphins on it... Several sundays this summer, the beautiful local jazz from Il Baggato was absolutely trounced by terribly mixed deep house coming from the building of that dorm shithole. What's worse is that no one was even dancing. They had a FULL PA. Fuck those clowns. They're the reason nothing relevant has opened down here recently... Boulton & Watt? give me a break... Hair of the Dog? fuck life.