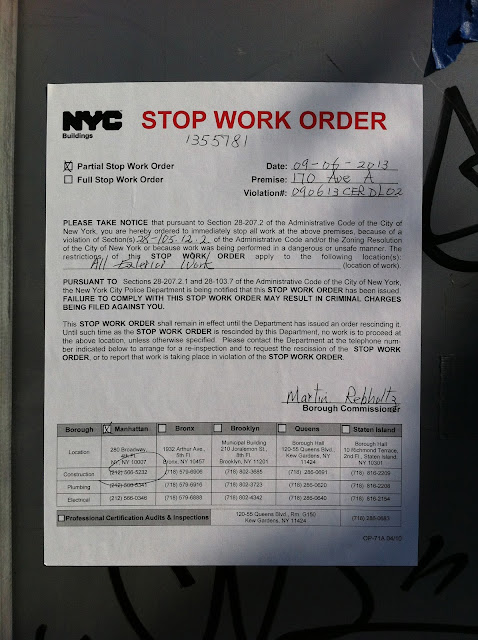 On Sept. 9, we reported that workers installed three AC units adjacent to the incoming 7-Eleven at 500 E. 11th St. ... placed inches away from the bedroom windows of tenants.

One neighbor told the No 7-Eleven blog:

The units make a loud “WHOOSHING” noise every 15 minutes and since all the bedrooms are located off the alley, there has not been much sleeping going on in either building.

The city investigated complaints from neighbors and issued a Partial Stop Work Order.

Any progress to note since then?

"We are roundly being ignored by 7-Eleven and Westminster NYC [the management company]," said resident Brian Katz. "Westminster is unapproachable — guarded, cold, borderline obnoxious. The [construction] workers are diligently going about their jobs... still, both inside and outside. So, the order doesn't mean much — surprise, surprise!"

As for those three AC units, Katz says they are too loud, too close to the windows, structurally unsound (due to vibrations), and they are obstructing escape routes. See for yourself.

Email ThisBlogThis!Share to TwitterShare to FacebookShare to Pinterest
Labels: 7-11, 7-Eleven

The noise from these units are unbelievable. So disturbing at night when they click on and then off. Can wake you from a dead sleep.

If they are obstructing escape routes then you should call 911.

I'm so sorry for these folks... This would drive me crazy; as if we didn't already have more than enough noise in this area. And no, you can't say "You knew there would be industrial AC units [bars / restaurants / broken glass...] when you moved here, TRANSPLANT!!!1!!1!"

I live near the ConEd substation on 6th and A and we have a constant humming noise at night, but it's not too bad. Sometimes I even wish it was louder to provide some white noise to drown out all the idiots who simply MUST woo-hoo on their fire escapes or in the shared backyards at 3am in the morning.

As a NYC General Contractor I made the mistake of starting a job years ago before the permit showed up and the building dept. shut us down in a blink. We weren't allowed to even be in the space until it was resolved which took about a week and it wasn't worded anywhere near as scary as the above.

Personally, I would be calling the building dept. daily.

call 311 and tell them you have a noise complaint and you need a department of environmental protection (DEP) inspector to test for noise code compliance in your apartment. Make sure you mention noise not vibration or how close the unit is to windows or you will get transferred to the DOB not the DEP. A DEP inspector will contact you and will actually come out to an apartment to test for code, and will issue a fine for a violation. work with your neighbors to get the DEP inspector access to the apartment closest to the equipment for the worst case noise levels. for recurring violations they will eventually order a cease and desist so the units cannot be operated.

FOlks: I am the person who headed up the opposition and won against then Verizon's 'Cooling Towers' located on top of the building at 13th & 2nd Ave. These things were as big as semi trucks and shook the entire block, and the old folks home on E 12th Street. My best advice: be absolutely RELENTLESS. Get signed petitions going from everybody near and affected. Get down to the community board ASAP and get on the meeting agendas. Get down to city hall and pester the councilman/woman. Our end result in 2004: Verizon was forced to spend 2 million on sound barriers for the roof of that building. You can see them today. You're Welcome :0

Call Rosie's, Hoylman, Kavanaugh's offices. Get the electeds involved. See what GOLES can do.

Curious, where is the L.E.S. B.I.D. in all of this? Any "advocacy" Bob Zuckerman (exec. dir?) . What happened to all that talk about B.I.D.'s being a fast track to the City to respond on behalf of residents and businesses? I'd be curious to know. Thanks.
Jan

It would be a shame if someone removed the copper from those AC units for salvage...

Jan Lee--this building isn't anywhere near the LES Bid's district, it's in the East Village.

ou don't need to go crazy with everything everyone says--call 311 as one resident suggested and say loud noise due to ventilation system--they will come out and inspect. keep complaint number for follow up. don't call multiple offices for same problem--very counterproductive.