Report: David McWater is resigning from Community Board 3 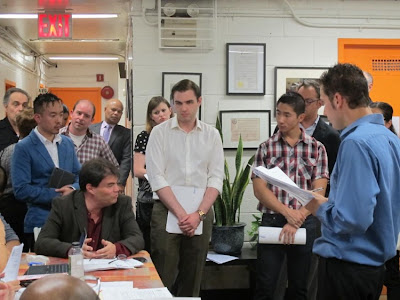 Longtime CB3 member David McWater will resign during tonight's full board meeting, according to an article published at The Villager this morning.

“I’ve done more than any community board member in the history of New York City,” McWater told The Villager. “Nobody in the last 20 years did anything like the Lower East Side rezoning and SPURA. The community owes me a debt — nobody’s ever done what we’ve done. Nobody — nobody ever did anything like SPURA and the rezoning.

McWater said that he'll likely make his remarks to the Board and community tonight "between the public session and the period where politicians and their representatives give their reports."

The resignation comes one week after an ugly confrontation between McWater and neighborhood group the LES Dwellers during the CB3/SLA committee meeting on Sept. 16.

You can read the entire Villager piece here.
Posted by Grieve at 9:16 AM

Well he and his ilk never stopped the hotel from getting built and that has now stolen much of my morning sun.

Glad he is resigning. What hubris!! Arrogance!

His shameful behavior at that last meeting has no place in polite society.

Wow, so much butthurt there... He could at least leave with some grace. If he is indeed proud of his accomplishments, there is a way to highlight that with modestly, without sounding like a total douchebag.

A little humility would go a long way. He maybe right, but jeeze, what a jerk. Imagine George Baily giving that speech?

That bloated bag of ego has made a fortune off this neighborhood with his bars; we owe him nothing. It is HE who should be grateful to US for making it possible for him to live the privileged life that he does.

Going out with the same lack of class he's shown all along. A bullying raging narcissist. Whatever good he's done is overshadowed by his insistence you be grateful to him for it.

What a shame that Saint Ann's was in the way of progress.

According to the article (and McWater's own tax returns), the guy's offical residence is in New Jersey. He's resigning because he was going to get thrown off for lying about his legal address. How noble of him.

By "homes" he must mean government subsidized rental units, right?

For once i have found common ground with Gojira

Wow, Mr. McWater tendering your resignation with such grace and humility absent of bitterness and personal attacks...Here is some free PR advice after a video circulates showing you unhinged attacking a woman 5xtimes smaller than you, and where you are heard calling a man who served his country in Iraq a "Marine goon" when he stepped in to diffuse the situation, and vowing to "bury" Aaron Sosnick of EVCC, a true pillar of this community,: Publicly, 1) TAKE RESPONSIBILITY for your actions. 2) APOLOGIZE for your actions. 3) APOLOGIZE for disgracing CB3 4) End with a simple I am GRATEFUL l I had the for the opportunity to serve this community. 5) EXIT stage left making your way back home to NJ to self-reflect. Mr. McWater those that are truly accomplished and have made a difference in this world do not need to tout it.

Some of his actions during meetings have made me uncomfortable through the years.

That aside, the job of a community board member seems thankless as all hell.

For someone who supposedly did so much for the community, it sure seems no one in the community likes him. Funny that.

At least I can stop wondering how someone with McWater's conflicts could ever have been allowed to sit on the Licensing committee.

Long live the Dwellers and EVCC who took the high road and finally rid the CB3 of this individual who was a real menace.

So he has a 'summer home' in Lambertville per the East Villager article. Lambertville is a quaint little town with lots of Victorian home laced with lattice, gardens, birds singing, butterflies, churches. There are lots of family run stores by artists and almost the whole town closes down at 6PM. Come to think of it, aside from the Lamberville Inn which is a large hotel, I don't recall seeing any places with liquor licenses there.

Is it a crime to lie about your residency in order to be on a community board ? I'm sure he still has an apartment in NYC but does he reside there most of the time ? Based on his no comment statement regarding where he files his taxes let's assume he filed as a NJ resident to get lower rates. If so, he is either lying on his taxes to get a lower rate or he is lying about where he lives to be on the community board.

gojira was so right it deserves repeating: "That bloated bag of ego has made a fortune off this neighborhood with his bars; we owe him nothing. It is HE who should be grateful to US for making it possible for him to live the privileged life that he does."

and remember we did not make it possible for him by choice!
how an owner of multilple bars in our over saturated community could be allowed to bully the cb#3 sla committee for so long was always a valid question that McWaters was able to avoid, his statements alone are grounds for removal from cb#3.
he is so full of himself, and so rotten, that it has infected what is left of his greedy little mind.

I call BS on the hotels. The Thompson LES, and the incoming 162-room Ludlow Hotel and 150-room Hotel Indigo. Now the douchoise have more places for their douchoise friends from back home to stay.

His accusation of "one issue" block associations is misguided and self-serving (hello, mr. bar owner). When a neighborhood is "over saturated" with bars and liquor licenses and is recognized as such by both CB3 and SLA the only sane reaction is to oppose the addition of additional liquor licenses until balance is restored. If the boat is sinking the addition of another bucket of water is not an option.

As I read Lincoln's shocking article in the Villager I was searching for the perfect word to describe McWaters attitude and found it here in the first comment.
"Hubris"

I can't wait to her his speech: "Everyone in this room is better for having known me. I've done more than all of you combined. You can't even comprehend how great I am."

This guy sound like a character from "The Office".

"I have done more than anyone in the history of NYC" Wow, way to pat yourself on the back there.

Yeah he put more BARS in the East Village than anyone in the history of the hood.