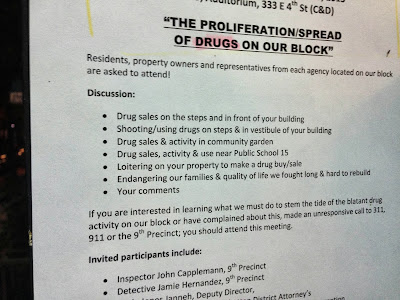 Resident Steven Matthews was in attendance, and left this as a comment on our earlier post about the meeting:

The meeting went well. There were approximately 36 people there, including someone from the 9th Pct and the DA's office. Almost everyone had a story, of drug use taking place in their vestibules, dealers operating out of renovated but unoccupied building, dealers having keys to the NYCHA buildings and operating out of them, founding members of community gardens (El Jardin) who have all but abandoned it because of drug dealing in them... And they came from all through the neighborhood, from 3rd and 5th Streets as well as both avenues. Many of them said they heard about the meeting from this blog, so hats off to EV Grieve!

There will be a follow-up meeting in two weeks. In that time, people with sales/use taking place in their buildings will approach the owners and try to get the building registered in the city's Tresspass Affidavit Program. And everyone was urged to call 911 when they see drug sales/use taking place. The 9th Pct rep said that despite the number of stories people had, there have been very few calls, so they were not aware of the severity of the problem.

DNAinfo and NY Press were both there; I'm sure they'll have stories today.

We'll link to those articles when they are posted...

Any word on when/where the follow-up meeting will be?

I live here - what is happening now is nothing like what was happening as recently as the 1990's. While I sympathize with the concerned parents, drug use and sales have been happening here since the stone age (no pun intended,) so, good luck! As an aside, please stay away and don't gentrify my block. Look! there's a rat over there in TSP - go get it!

What the philosophical zombie said and then some: Take your screaming brats to Park Slope or Williamsburg or, preferably, to New Jersey. I moved down here 37 years ago to get away from d-bags like you. Stop following me. I heard it's really beautiful in Alpine NJ. Plus you'd have a Republican Governor.

LuLzzz ... I luv people who think change isn't inevitable.
Park Slope was a shit hole a few decades ago and this nabe is in the middle of the same transition.

Did anyone hear a number of gunshots last night in this area? Around 2 AM 5-7 very stacatto bursts, then nothing.

Jim,
The tentative date is Oct. 9. Fliers will be posted as the time approaches.

Uncle Waltie,
If people with kids took your advice and moved into the suburbs, those kids would grow up and become like you, running away from something they can never escape.
This anti-drug effort is going to happen no matter what, and the only place there will be any opposition is here, or on Facebook -- which is to say, nothing to take seriously.

I'm surprised the account does not include the color and age make-up of the meeting. It would also be interesting to know how many who attended were renters, how many condo-coop owners, how many NYCHA residents.

Twenty years ago the newer white residents (coop owners moslty) held a block meeting to discuss the drug dealers. The dealer on our stoop attended -- after all, he was part of the block -- and so at the meeting no one breathed any mention of drugs. The meeting was held in a vacant lot and a good time was had by all.

I knew the dealer on our stoop well enough. I never knew him to commit any kind of violence whatsoever. The previous dealers were even mellower, a Puerto Rican couple straight out of Sesame Street or Mr. Rogers Neighborhood.

If you're merely speculating on who the dealers are, it might have been wiser to hold the meeting without the police, so the members can choose with deliberation how to approach the police and the city.

Concerned parents trying to stop drug dealers are d-bags?? WTF!!?? Philosophical Zombie and Uncle Waltie, if indeed you do not want gentrification and republicans on your block, you should then be supporting these parents. I’m guessing that the majority of these parents and their families have been in the hood for a long time, perhaps generations, and don’t have the means to move Park Slope or Alpine NJ. Go ahead, chase them away and just watch the lily white speculators and gentrifiers that you abhor take their place.

It's not about the kids, which is really, I agree, a crutch to justify why you don't like something and to think you can get instant sympathy.

it's about the guns and violence. Every instance of gunfire and violence we've had (it escalates badly about once a year) has been centered around that one apartment. I've lived for 20 years next to drug dealers and raised my child from birth to adulthood here. The drugs in and of themselves are relatively benign, but the bullets, fights, muggings, police chases are not.

Why can't we envision a neighborhood that is safer but not only for the rich? Why is it beyond everybody's imagination, on this blog and in our government that makes policy, that we can't have a livable environment for all economic classes? I would like to work toward that end, and not have to be defending drugs on the streets in order to keep the gentrifiers away.

I like the way 'Change' has been co-oped by the far right to mean 'everything I take and want more to get away with.' The never ending MORE. Let us see the same thrilling embrace in 10 or so months under a new progressive mayor of Change. I will get my popcorn ready to watch this great Change Lovefest here. I can't wait. Hooker we have a play date!

What is more of a menace are the persistent idling trucks outside the Fine Fare exacerbating my old cat's 9/11 asthma. Where is the uproar on the block concerning this issue?

Here come the entitled caucasian suburbanites to tell everyone how to live Again.Christopher Columbus, colonialism, and the dutch east india company live on in spirit, as once more, The anglo saxon goes to someone elses home and starts telling people what to do. Im white by the way, so dont try to confuse the issue by calling me racist against caucasians, because we all know how hard it is for us as white americans in this racist World. If you cant tolerate drugs, why come all the way from the.suburbs to a known drug culture area. Boo hoo you nosey do gooders.

Just like most of your meetings willl be mostly facebook talk because as long as there are corrupt cops selling drugs, your citizens outrage is misdirected.

As if the total whitewash, economic ethnic cleansing wasnt enough. Yall chose to move here as a luxury, and because of that there is a hostile police apparatus aimed at the poor around here. And you cowards are still scared. This nimby mentality doesnt fit in Loisaida. I grew up in the area and people are suffering for your comfort and "safety", its never enough.with colonialists. Fyi, if les seems dangerous To you these days you are a bitch homie