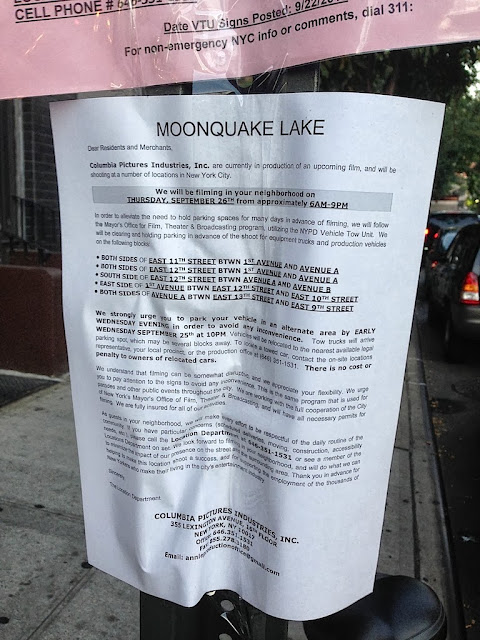 Film crews are out in force this morning along Avenue A and East 11th Street, among other locales... signs point to a Columbia Pictures release called "Moonquake Lake" ... which is apparently code for the remake of "Annie."

Citi Bikes apparently also have a starring role, based on this photo of Wallis yesterday... 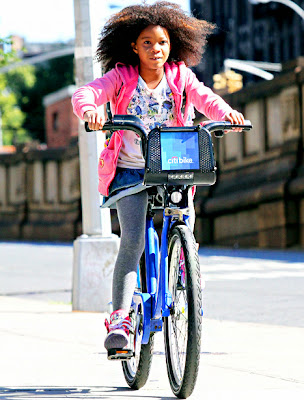 Which may explain the new, presumably temporary, Citi Bikes docking station on East 11th between A and First Avenue... 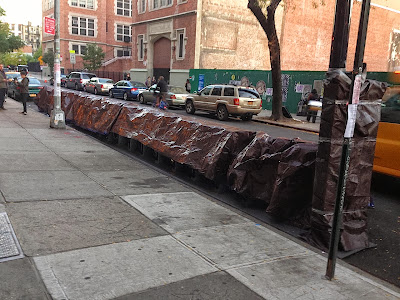 Columbia reportedly plans to release this film on Dec. 19, 2014.

A few photos from the set on East 11th Street via Shawn Chittle... 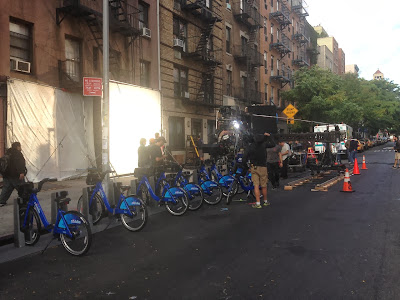 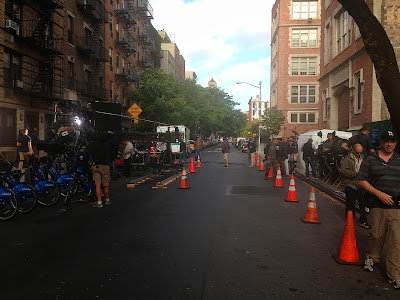 I want to thank the "Annie" crew for being extremely gracious and kind and moving out of my way (in fact clearing the sidewalk) to get my bike (NOT A CITIBIKE) out (it was right where the director was sitting).

They moved like it was their job and it was very nice, unlike many other (amateur) sets where the crews can be kinda jerks.

I don't want to get political, but these are union professionals, and they acted like it.

Thanks folks. Have a great shoot on my street.

One has to be 16 y.o to ride a citi bike. Then again, most who use these are kidults or adultlescents anyway.

It's nice to hear that some of these crews can be civil to the people in the neighborhood. Whenever I see these obnoxious trailers and equipment I get annoyed because in the past some of these people have come around like they own your block. Years ago one of the popular TV crime dramas was on my street shooting. Some of the 'stars' were out there too so I wanted to get some pictures. Next thing you know one of these self-important cinema-yuppies with khaki shorts and a head set on puts his hand in front of my camera like these people are too important to be photographed by the local peasantry. Fuck that!

Anyway good to hear they were cool and I hope they take the bikes too!

Ahh, I was wondering what "Moonquake" was all about. I walked through this scene on 11th and yeah,it was totally pleasant, if not a bit crowded.

I recall hearing Jada Pinkett Smith bragging it up about her daughter starring in the Annie re-make - ugh. Seems Willow had other ideas:

What Chittle said. I almost ran over a clipboard-toting PA for that awful-sounding "Shelter" homeless-romance thing the other day. They'd blocked off the southwestern corner of the park, and normally I'd respect that, but I was late biking my kid to school and so I rolled right in and the PA tries to physically block me, like she's a linebacker or something, and sputters "You can't just ride in here--" Into the public park I bike through every day with my kid? Yeah, whatever, Hollywood wannabe suckass. Her boss yells "Let 'em go," but we were already long gone.

Hey, I get it. The film industry means jobs for regular people. Great. But don't go disrupting the shit out of people's lives and taking up public space and then be dicks about it.

One also needs a credit card.

The overlap in shoots has gotten overwhelming across the East Village. That could be remedied by a more careful look at shooting schedules at the permit office...

Screw these movies, they take up too many parking spots, and usually are jerks. And why cant anybody come with a new story, every movie is friggin remake