Rite Aid on E. 14th St. closes at the end of October 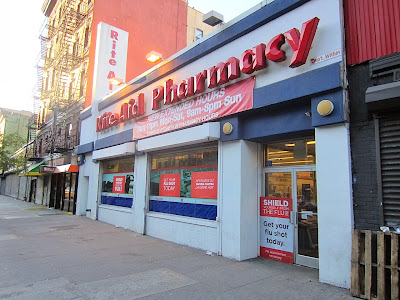 Employees at the Rite Aid on East 14th Street between Avenue A and Avenue B received word last week that the store will close at the end of October. A manager confirmed the closure.

This is the latest business to exit ahead of some new, unspecified development via Extell ... Rite Aid joins Rainbow ... The Blarney Cove... Bargain Express ... Petland ... and the ABC Animal Hospital as former block mates. (The laundromat moved toward Avenue B. ABC Animal Hospital is now at 200 Avenue A.) 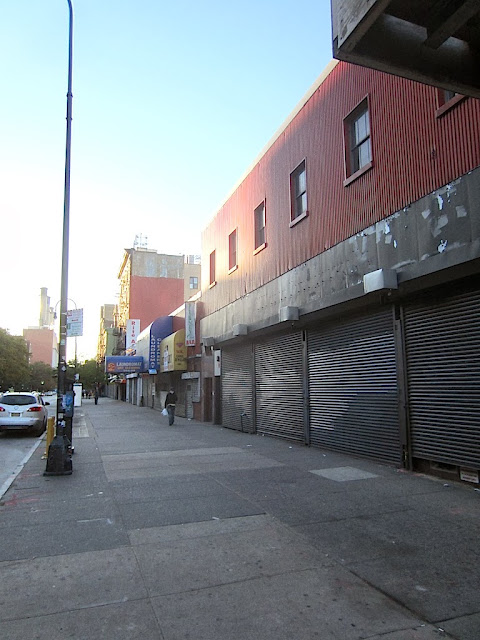 As we first reported last December, eight parcels consisting of 222 Avenue A and 504 - 530 E. 14th St. (excluding No. 520) were leased for a 99-year period by the respective owner of East Village 14 LLC. As The Real Deal reported, city property records show that Gary Barnett of Extell Development signed a 99-year lease worth $35.14 million to rent eight Sol Goldman-owned properties.

Workers had been test drilling ahead of the construction in recent weeks... we saw workers pack up the Davey drill last Thursday... 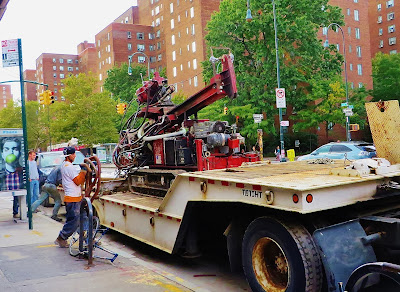 To date, reps for the developer have yet to file any demolition permits or building plans.

East 14th Street corridor now nearly business-free ahead of new development
Posted by Grieve at 5:30 AM

If I go shopping there today, I will still be waiting in the checkout line when they close next month.

I'm confused. Now you're lamenting the closing of a chain pharmacy? You regularly thinly veil your contempt for new Duane Reades, etc and 7-11s, which also provide jobs and now you're sad about a Rite Aid closing?

I'm confused too. Can you show me where I expressed disappointment/sadness in the post about Rite Aid closing?

The news is that a good portion of the block is now being prepped for a new development — for better or worse.

I understand the sympathy for Rite Aid. Among the pharmacy chains, Rite Aid provided the best affordable prices and even had a great discount card for the elderly. They even had a great $1 section. I will surely miss Rite Aid.

Second, the vet that moved to Ave A closed for renovations with a sign that they would be open by Sept 15 but it looks abandoned. Anybody know what happened to them?

Even though RiteAid is a chain, each store has its own character, and I've always found their pharmacy people excellent. So it's sad to see them go.

I think this means that Superdive is reopening!

Jill, not 100% sure but I think the vet's office might be in the basement now.

Rite Aid must have some deal for a lease in the new development. Anyone know if they own the building? Have a long term lease?

The vet's office on A between 12th and 13th is operational. They are working in the basement.

520 east 14th is in the middle of the other properties that will be the site of development. thus, 520 seems prime for an offer by the developers. rather than be quietly pushed out of their homes, residents of 520 should know that if they are rent stabilized or rent controlled, they have rights, even in the event of a sale. generally,pursuant to those leases, tenants have a right to renewal of their lease. sale of the building does not terminate those rights. the stabilized and controlled tenants of that building may be able to hold out and keep their homes, or negotiate with the owner to relocate. given what kind of money that would be changing hands if that building were to be sold to complete the mega development that seems to be on the way, buyout cash could be considerable. there are organizations in the neighborhood, like G.O.L.E.S on avenue B that can provide information about the rights of those tenants.