One of these years someone may finally do something about 'the Grand Canyon of E. 4th St.' 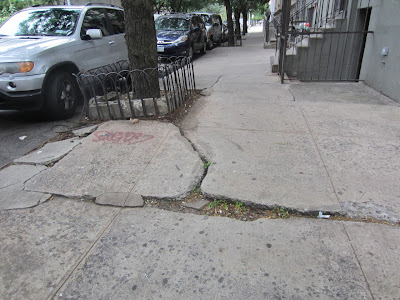 Meant to mention this earlier... NY1 had this report last Wednesday ... about a big-ass crack in the sidewalk on East Fourth Street between Avenue B and Avenue C (on the north side, a little closer to C)... 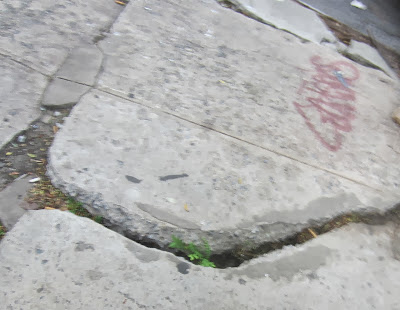 Residents say that they've been tripping over "the Grand Canyon of East Fourth Street" for years.

"I think it's terrible," said one resident. "Anybody could fall break their leg or something. It's terrible. That needs to be addressed."


Calls to 311 have yielded zero results.

According to the city's Department of Transportation, it's the property owner's responsibility to fix the sidewalk. It turns out that the sidewalk sits in front of a city housing authority building. After NY1 told that to DOT, inspectors went out to take a look at what needs to be fixed. DOT said it'll start the process to make that happen.


Place your bets on when something may finally happen. Dibs on 2018!
Posted by Grieve at 5:30 AM

Reminds me of the Himalayas pushing up on the north side of East 9th street (btw 1st and A).

If I'm wearing high eels, I have to grab onto the tree to navigate up and down that mountain!

Ha! If it's anything like the pacthwork job NYCHA did in the front of my building (and that was minor) I can only imagine what this will look like when it's "patched up".