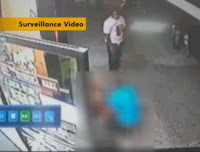 A man who identified himself as an officer with the Bureau of Alcohol, Tobacco, Firearms and Explosives robbed a couple on East Second Street and Avenue A at 1 a.m. last month, according to published reports.

Per Serena Solomon at DNAinfo:

The suspect ... asked for the victim's wallet and cellphone so he could write a ticket for public intoxication, cops said.

He told them he would be right back, but never returned, police said.

DNAinfo and NY1 both have video of the suspect.
Posted by Grieve at 12:09 PM

LOL, yeah, I saw this on the news last night and had the same reaction as the guys above.

How drunk do you think they were?? I am guessing not much and that the victims, although I feel it sucks for them, were dumb rubes.

Haha, victims of crime are to be scorned.

did the "federal" officer show a gun? If so, don't disparage these people. Most everyone will do what someone with confident authority tells them, especially if wearing a gun or uniform anyway. I believe most people are hardwired to be slaves.

Welcome to the neighborhood...now go back home.

Have to disagree with you on this one... if only to say that this "trend" might escalate to kidnapping. Imagine saying NO to someone with a badge and gun? Scary.