An updated look at the all-new Astor Place 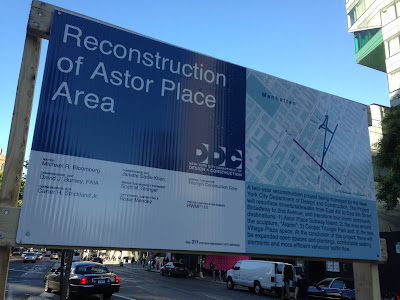 The reconstruction around Cooper Square and Astor Place is upon us... Yesterday, officials shipped out the, uh, official news release about the project (which we didn't receive!*) ... and Curbed has the details ... as well as some slightly updated images  ... 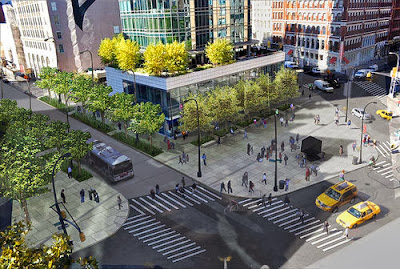 The plan remains the same ... which includes enlarging Cooper Park, streamlining the street grid and creating new permanent pedestrian plazas. Not to mention adding 60 additional trees. Curbed notes that the work will cost $16 million. The work will start at East Fourth Street, "where new drainage catch basins, curbs and sidewalks are being constructed."

And the project will work its way north over the next two years.

Meanwhile, there hasn't been any official word about what will happen to Jim Power's mosaics that adorn Astor Place.

Per Serena Soloman at DNAinfo yesterday:

"They should not be removed," said Power, who plans to put up signs saying the mosaics are in danger.

"We are being pushed around by this so-called redesign. This is our neighborhood," he said.

Well, if they fix the drainage in front of KMart, that would be one positive. Such a drag getting around the lake that forms there when it rains even remotely hard.

I don't understand a leadership that puts $16 million to an unneeded park design when parks in the boroughs are in drastic needs of upgrade, we're shutting down fire houses, school and libraries.

to make the new astor place more "attractive" for the new high-class tenants.

astor place is historic they are giving the "cube" to the glass building.....and removing my work ..our work.....there are two back to back subways.....broadway and astor place.....300,000+ people go and return from work each day plus hundereds of thousands of people a park ...no traffic on astor place who came up with this....?it is and has been celibrated as an open causeway .an entrance to "our " neighborhood....astor place is historic....the dot says its not being used,,,really have any one including the cb3 ever been out there at 5:30- 9 pm youll see the thme sq kind of croud...now a park in the middle and no streets from 8 st down to 4 th st and they want to remove a street ,a historic one at that...it can and should be stopped..head of d.o.t. saya (villager ) the streets could stay the same or the redisign...well wake up its up to us................will take up signatures to go to court and will submit thousands of cracks in sidewalks and all sidewalks that have un even sidewalks city walks will be submitted to city i mean ....thousands of complaints..i am disabled and cannot even go on some sidewalks cause there all bumpy so fix them i will raise at least $16 ,mill in complaints against city throught the entire city.i own and have owned...www.citywatch .tv.. for years ..time to put it to use....also soon .......www eastvillagealive.com look out.....haw about a billion in complaints....this is urban warfare..........with new york city...i will remove the works my self before i let the city destroy them.....no help from anyone ...its a done deal/...no warning will be given.........eastvillagenews blog

It's a park, it's trees! I welcome this re-grooming of barren, badly organized space.

If they think this cement field will attract anything other than skaters they're in for a surprise. It's too sterile to be inviting. Theres little seating. The reconfiguration essentially replaces tar with cement so I'm not sure how that justifies this expensive project.

Yeh, hard to complain about trees but $16million?

It'll make the perfect companion failure to the nearby Death Star!

Dont worry about the cost of throwing wealth at wealth. It will be made up for in the savings of not having to build a mote around our castle of classism.

Times Square South sounds great. Know tons of New Yorkers who live here who get up sunday morning to go soak up all that great Authentic™ Times Square vibe. We are all tearing down the gates to go live on Times Square.

Poor Times Square new york can only envision you as a whore not the graceful lady you were built to be.

Village there is a pimp offering to by you a nice new dress. Because he cares about you.

Its not an inevitability to accept the gift you know.

The Sculpture for Existing building and the Death Star represent everything wrong with modern architecture - they both scream "Look at me" and have nothing to say.

The Sculpture for Existing was based on a design from the 20s, a rather brilliant one at that, but due to cost cutting has been reduced to a very base level, passing grade structure. And how appropriate the Death Star looks like a glass pyramid, as it too is a glorified tomb for the businesses that aren't coming.

To put this in perspective, I read this weekend they are going to spend $200 million to replace the boardwalk in Rockaway Beach. I'm sure every dollar will be properly accounted for out there in Queens.