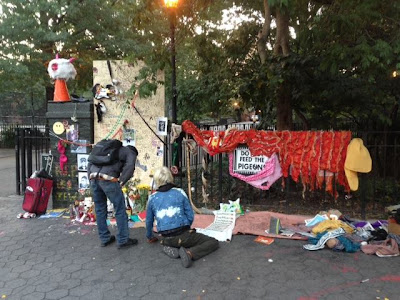 Well, we were wondering how long the memorial for LES Jewels would stay up on Avenue A and East Ninth Street... His friends began to erect it on Saturday night... and it continued to grow the last few days.

In any event, EVG reader C. Ryan passes along this photo... noting that workers from the Parks Department asked Jewels' friends to dismantle the memorial... which they apparently did... 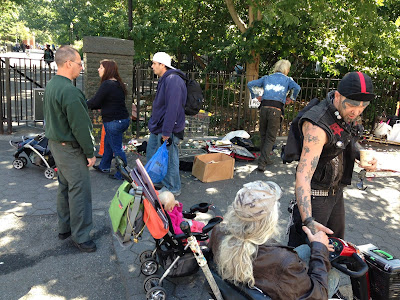 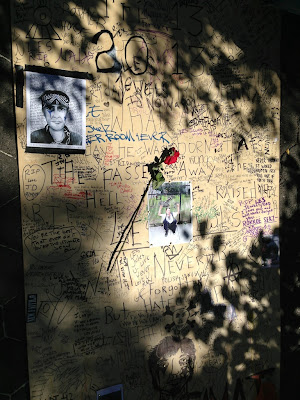 In the comments, Chris Flash reports that the memorial has been moved to in front of MoRUS at 155 Avenue C between East Ninth Street and East 10th Street...

They couldn't even give it a week? Jesus guys, have a fucking heart.

It's been relocated to the front of the MORUS space at C-Squat on Avenue C, between 9th + 10th Streets....

That's ridiculous, they should have given it at least a week or so, it's a fucking memorial to a guy who basically lived there.

From what I'm hearing, a lot of cops really liked him. I think that the memorial was allowed to stay for several days because of this....

I'm glad they were asked to move it. It was up for four days. That's enough.

No one needs that stuff on a public park fence (by an entrance no less) with a questionable assortment of characters hanging out/sleeping next to it at all hours.

Anonymous 10:14 - show some respect for the dead and the people that mourn a friend...

How is Anonymous @ 10:14 disrespecting the dead? He/she simply said that it was a good thing the memorial was moved to a place where it can stand for as long as people wish.

Light violence is a small price to pay for some color in the neighborhood. It's not like it was some bland Yuppie pushing me on Avenue C.

It adds "color" to the neighborhood?