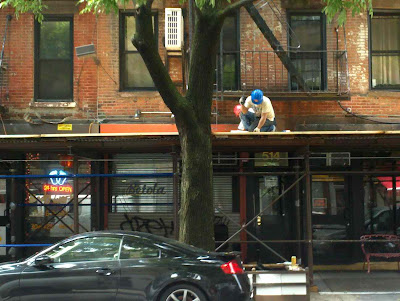 On June 11, scaffolding and a sidewalk bridge arrived outside 514-516 E. Sixth St. between Avenue A and Avenue B... In 2010, the Board of Standards and Appeals (BSA) told landlord Ben Shaoul that he needed to remove the recently added (and illegal) seventh-floor penthouse. (The BSA said that the sixth-floor addition could stay.)

There was the usual legal wrangling for a few years before the crew arrived... which made some residents suspicious back in June... but as these photos from a tipster show, workers have been removing the penthouse (by hand) in recent months ... As The Villager reported in June, the rooftop addition here was never actually fully completed because the DOB hit Shaoul with a stop-work order. 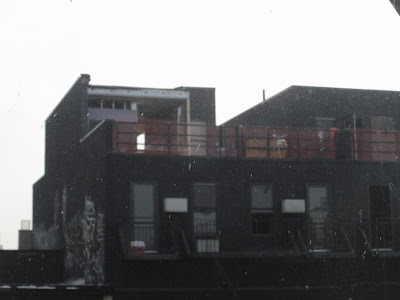 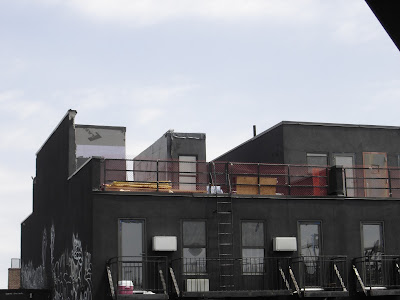 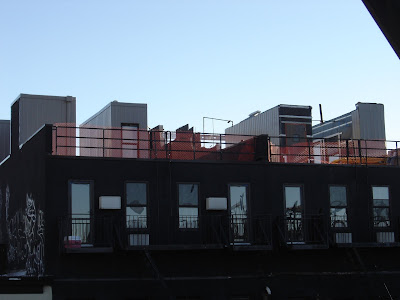 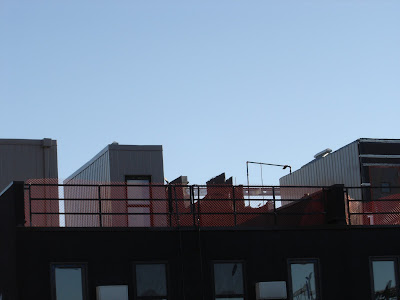 Meanwhile, the nearly five-year-old battle over the one-story addition to the Ben Shaoul-owned 515 E. Fifth St. carries on... we hope to have an update on that one shortly...

Is Ben Shaoul finally removing the illegal penthouse addition on East 6th Street?
Posted by Grieve at 5:30 AM

I must not be very observant, because I live a few doors down and spend a lot of time on the roof during the summer. I knew they were supposed to take that thing down years ago and wondered what had happened. I guess that because they're leaving the 6th-floor addition, the removal of the 7th floor is somehow less obvious. Before the addition of the 6th and 7th floors, you could walk up and down almost the entire block on the roof, which I suppose is not a good thing in terms of crime, but it was fun and neighborly on occasions like the 4th of July. It also felt a lot less claustrophobic when the sightlines down the block weren't blocked by this hideous behemoth.

Anon 9:17: I also live on this block and once had a group of people who don't live in my building descend towards the backyards on the fire escape, then stop outside my window to chat. I almost called NYPD on them and made sure to speak to them so they knew they'd been seen and would be recognized, in case they were checking out apartments with open windows / no window guards etc. to break into. This is troubling and I hope tenants in your building stick to your roof and fire escapes.

I actually regret not calling the cops that day and will do so if this ever happens again. Better safe than sorry; I know 2 people whose buildings were broken into this way over the last couple of years.

This sends a strong message indeed to those who will build without first obtaining permission to do so: you will get a slap on the wrist, so go ahead and make your profit.

(He removed the uncompleted "penthouse" that was in any case just a gratuitously extended middle finger to the "powers that be" and neighbors, but won his extra 6th story, which probably would have been rejected had he applied for a permit.)