A few more details on Momofuku Ko (aka, TBD) coming to Extra Place 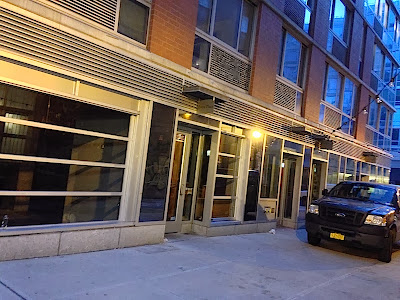 Extra Place seems extra quiet these days... though likely not for too much longer. As The New York Times first reported, Momofuku Ko is planning to move its "counter-only tasting-menu restaurant" from First Avenue to Extra Place.

Of course, there's a big vacancy here since sister restaurants Extra Place and Heidi closed earlier in the fall at 6-8 Extra Place, the alleyway that runs behind the former CBGB space on the Bowery off of First Street.

Paperwork filed ahead of this month's CB3/SLA committee meeting for 4-8 Extra Place seems to have an air of Kremlin-like secrecy.

There's no mention of Momofuku or chef-founder David Chang on the documents on file at the CB3 website. Just TBD.

As for other details. There will be four tables seating four people each as well as a counter for 25 diners. The proposed hours are from noon to midnight Sunday through Wednesday; until 1 a.m. Thursday through Saturday. There will be 20 employees... and, uh, a sound system featuring an iPod with two small speakers, per the documents.

The Times reported that Momofuku Ko will possibly move by the end of the year.

Now will Extra Place become Extra special?
Posted by Grieve at 5:04 AM

Well good luck to anyone there. Whenever I pass by Extra Place I see teens playing basketball against the wall, skateboarding, or generally hanging out.

Well at least now I will no longer have to plow through the upscale crowds clogging the sidewalks in front of the current location.

@gojira, no, you still will. that's momofuku noodle bar. ko's current location is a very discreet doorway about 30 ft to the left.

When people ask me for directions to this place, I always pronounce it mama fuck you. It makes me laugh.

Nothing says Extra *Special* Place like foie gras with lychee and chardonnay jelly!