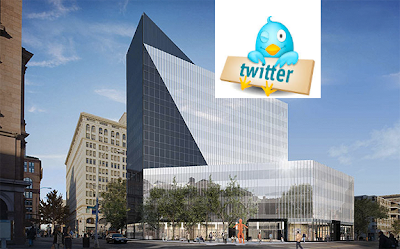 Big story this afternoon via Crain's: Twitter is in talks to take a big (more than 140 characters!) chunk of 51 Astor Place.

The company is in talks to take as much as 100,000 square feet at 51 Astor Place, an office building that was begun in 2011 on a bet that the city's tech boom would produce deep-pocketed tenants willing and able to pay the building's high-priced rents despite its off-beat location on the edge of the East Village. That gamble by the building's developer, Edward Minskoff, now appears to be paying off.

Last month, 1stdibs, an online auctioneer that specializes in the sale of high-end vintage goods, a showcase for a large (1,800) group of antique and design and art dealers, agreed to a deal to take the 12-story building's entire third floor.

Worth noting, maybe: Facebook is moving into space across the street at 770 Broadway. Rumble on Astor Place!

Facebook is moving into the neighborhood; Midtown South expands its boundaries, apparently
Posted by Grieve at 1:55 PM

How many tenants does that make now? One? Heh.

East Village has been dead for decades, nothing to see here, except depressing posts.

"How many tenants does that make now? One? Heh."

Actually no. If Twitter move in that will be two. 1stdibs already have one of the 12 floors and Twitter may take up to 100,000 sq ft, which you can be sure is more than one floor. Hold the schadenfreude — it might not be necessary.

Happy to finally see some lights from inside the building, not just those reflected off 770.

To the author of this article, 1stdibs is not an online auction website but a showcase for a large (1800) group of antique and design and art dealers. I know this info first hand.

Hmmm...are we entirely sure this isn't an elaborate hoax by @51deathstar to get more Twitter followers?

If anything, I would have thought 51 Astor looked more like a Microsoft kind of building. I'm just saying.

Just remember what happened to Palo Alto in the late '90's. Hoping and awaiting for dot com bubble 2.0, and hopefully the ev or nyc can go back to the way it was.

The Empire has struck back. Oh, yes, it is now fully operational.

What does the Death Star have to say about this? I was beginning to feel sorry for it.

Like Crain's said, tech companies are "flocking to midtown south for its classic architecture and turn of the century loft spaces." Twitter made a bundle with its IPO offer and now looks to be poised to blow it on sloppy seconds.

Whatever 51 Astor is, it isn't "classic architecture" or "turn of the century loft spaces."

On the other hand, it will probably get rented, ugly though it be.