7-Eleven, expanding and contracting in the East Village 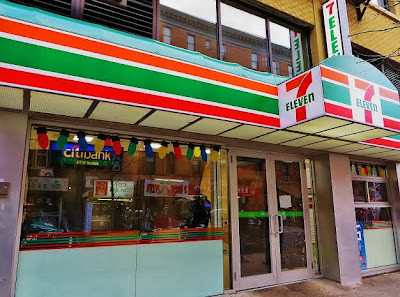 As we first noted on Sunday, the 7-Eleven on St. Mark's Place closed this past weekend. The Post has a piece on it today:

“I would rather go to St. Mark’s Market,” said Mike Romano, 26, a retail purchaser who lives in the East Village. “It’s always the tourists who go to the 7-Eleven. They don’t know you can go to the corner deli Gem Spa and buy everything.”

Meanwhile! At the 7-Eleven on Avenue A and East 11th Street... workers expanded the sign on the East 11th Street side of the store yesterday... perhaps clearing up the rumors that the remaining space (the former Angels & Kings!) would turn into a Subway or Starbucks... 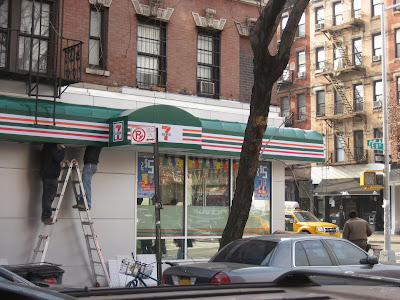 [Photo by Anton van Dalen]
Posted by Grieve at 5:00 AM

It will be a long winter for the 7-11 on Ave A. Less tourists less slurpees sold in the cold months ahead. It's all down hill after the coming SantaCon.

Thanks for the "unobstrusive" storefront we were promised, you lying tools.

Hmm. I think I read somewhere -- maybe the comments section of a local blog? -- that the Avenue A store was corporate-owned, where the St. Marks one was a franchise store? If so, I suppose the mothership will be happy to run it at a loss for as long as it takes to knock out the nearby bodegas and set itself up as the only source of ciggs and milk within blocks. Starbucks employed a similar strategy to choke mom and pop cafes in the early '90s.

Tune in Sundays 1-2pm to see the 7-Eleven protests, live.

Cool camera! This should deter the 7-Eleven thugs from intimidating the surrounding businesses.

Does this one have a franchisee yet? How much of 7-11 crap will whoever owns this oversized white elephant have to push just to cover the rent?

Not sure at all what 7-11 corporate sees in this corner.

I usually leave the sound off but I just turned it on so you can hear the street. It makes such lovely music.

However, if anyone has a problem with this please let me know and I'll disable it again.

There's no franchisee yet. 7-Eleven pays around $30K a month in rent. Good luck making that rent with 4 for a dollar tacos.

Does anyone know if there is a sprinkler system under this awning?

So what ever happened with the loud a/c exhaust fan situation in back?

Shawn, what a great service you are providing for our cause. There are many of us that were looking for something to do other than Sunday's btwn 1 and 2. Now we can watch 7-11 with this tool you have provided. You really have fully embraced the tool concept. Rock on bro

What they see is brand new massive buildings going in across the street. If they don't close before that goes up they are as good as gold forever as the people (mostly students) who move in there will have no reason to not shop there.

Anon 6:35, nothing has changed. The noise from the four units between 500 and 502 East 11th is louder than ever. Westminster refuses to do anything, the Buildings Dept. has issued yet another violation, and DEP has issued another summons. Westminster's blatant disregard for its tenants and its neighbors is nothing short of mind-boggling. As Kushner and his management company continue to place their little identifying plaques on their many buildings, they continue to spread the virus of their ill-will. Very. Ugly. People.

I'm not advocating for 7-Eleven, but Gem Spa is a dump. It's basically a porn-magazine store.