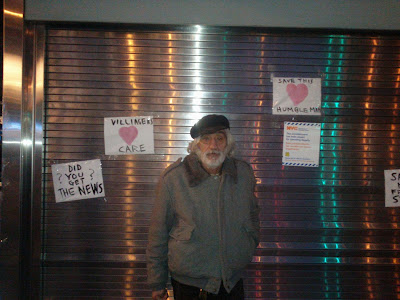 Over on Astor Place outside the downtown 6, Jerry Delakas remains businessless. As we first reported last Tuesday, the city shut down the newsstand he has run the past 26 years for "operating illegally." (Long story. Find a good recap here.)

However, time is running out. Word is Jerry has until Saturday to pay the city $37,000 to keep his newsstand … or he will have to permanently vacate the space. Of course, the city shut down his newsstand 11 days ahead of the deadline, preventing him from making any revenue.

NY1 had a report on this situation last night:

“We're about to file our appeal when they slapped the padlock on, and as far as we're concerned he was entitled to stay here until his appeal was decided, we think it's a violation of his due process rights,” said Delakas’ lawyer, Arthur Schwartz.

Councilwoman Rosie Mendez says Delakas deserves to keep operating, this is his only source of income and he's the sole provider for a sick brother.

“In this great city, one of the things we're known for I think, is sort of having compassion and looking at when there is an exception to policy, I think this would be the case,” said Mendez.

Meanwhile, there are rumblings that some residents who live in the building above Starbucks want the newsstand to go away. There are also stories of a female resident who rips down the signs of support from Jerry's Newsstand every night.
Posted by Grieve at 5:31 AM

To the woman that "may be" tearing down the support posters and those that live in the neighboring building that object to its presence, you will not be eliminating a newsstand but one man's income, the newsstand will taken over by someone else. How do you all sleep at night?

What the blazes do they have against a newsstand?!

They probably think it's an eyesore, not worthy of the new, bland New York being shoved down our throats, but which they moved here to "improve". Why isn't EVERY elected official all over this like white on rice, telling the city to back off? The timing on this just stinks to high heaven - Bloomberg just cannot let anything go, can't ever feel he has "lost" - hence his promise to crush the taxi industry AFTER he leaves the mayoralty - and will never understand that despite his billions, all he really is is a short, heartless thug.

Uh, if they get rid of Jerry, won't they just rent it out to someone else? Or does this woman think that they'll just get rid of it...

@Gojira… what does the guys height have to do with any of it? Weird comment. But yes I agree on your other points.

Was Jerry able to get his glasses and wallet out from inside the locked newsstand? If not, does anyone know if one of the local eyeglass shops might be willing to hook him up with new glasses?

Leave the News Stand alone, and to the woman who keeps ripping the signs down, you are a soulless slag.

The problem with personalizing this is that there is a person on the other side of the scale who is probably just as desperate as Jerry (perhaps) is. Someone who waited for a license to become available but can't get it because Jerry is holding onto one illegally. You are not allowed to bequeath licenses to operate a news stand.

Anon. 6:52 - "Desperately waiting for a newsstand license?" Oh, please, can the drama.

Right fairness. You see fairness in putting him out.

Who. Who is this ficticious person who is more wanted and in need than Jerry? That Jerry is the villian now? Really. Such arch twisted retoric.

And business licences are transfered, sold etc all the time.

The law gets interpreted. Enforced, not enforced, over enforced.all over this city.
This is just a newsstand.

but it has more grave consequences for more than one person's life here. Jerry, his twin brother who is gravely ill, and all of the people of this village for who he is 'Thier guy', thier touchstone, thier part of being.

Laws are built around peoples needs. We are not built around them. If something is unjust, out of balance, it calls attention to itself and opens up the constant process of ibterpretation and review of our standards our laws.