[Updated] Report: LIRR will ban booze during SantaCon, though not before it 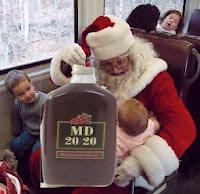 The Long Island Rail Road has instituted a 24-hour booze ban from noon Saturday through noon Sunday that overlaps with SantaCon, DNAinfo reports.

"We do it based on experience, based on when we've had difficulties….when we're going to be inundated with a lot of people under 21, or maybe just over 21, where they've created problems in the past," LIRR spokesman Salvatore Arena told DNAinfo.

Of course, this year, SantaCon starts at 10 a.m. in Tompkins Square Park... meaning SantaConners arriving via LIRR in the early morning won't be impacted by the ban. So there can be booze business as usual. No word about New Jersey Transit or Metro North.

Metro North and New Jersey Transit have also issued a temporary ban on alcohol this weekend, per Business Insider.

MTA police officers will be patrolling Grand Central Terminal, Penn Station, and other stations, it said. They will confiscate illegal liquor, and those caught drinking can face fines up to $50 or 30 days imprisonment.

You know it is bad when the LIRR has to institute a booze ban.

BTW, who pays for all of this?

The article Gojira linked lays it bare:"they don't tip very well. They order six drinks at a time and leave you one dollar."

...'cuz math not a strong suit for boozing santae. Or a red suit, for that matter.

@ nygrump- It's more like they come in half-gassed, order a Budweiser & like three glasses of water. Then no tip! The waters are for their buddies drinking their own booze over there in the corner.

If Santacon were cancelled you can be sure a majority of the shitheads would still come en masse and get piss drunk on our doorsteps.

I don't get it. Are you normally allowed to drink on the LIRR and Jersey Transit?