Several readers noted this morning that workers have removed the plywood fence from outside David Schwimmer's new home on East Sixth Street... 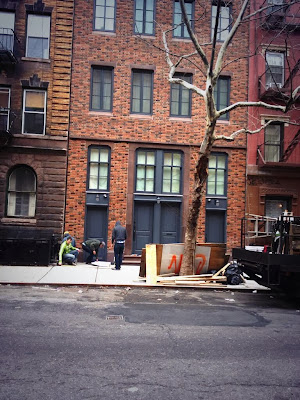 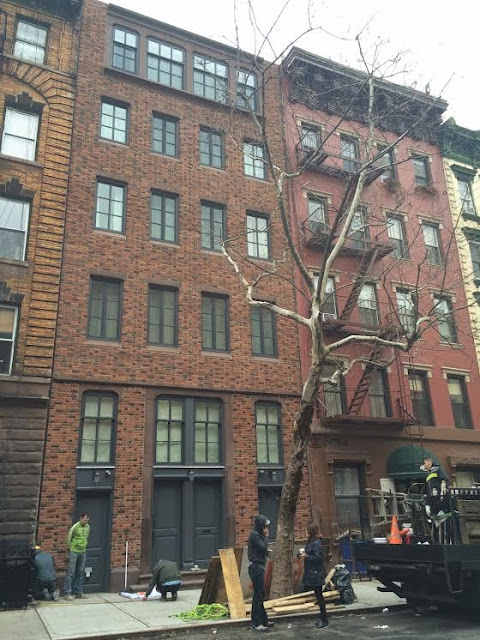 Thank you for the memories, David Schwimmer Plywood Fence... 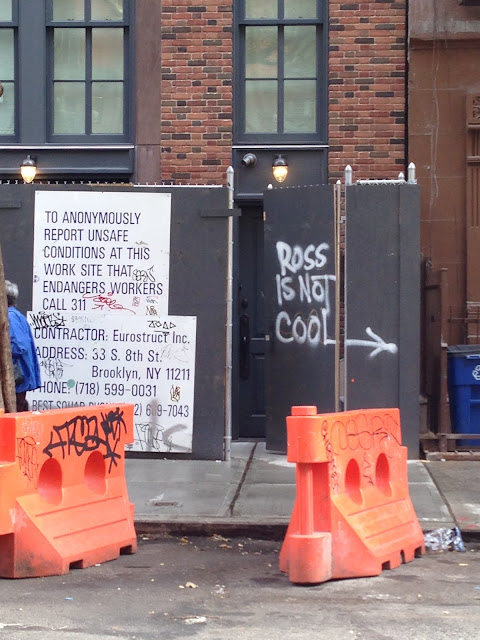 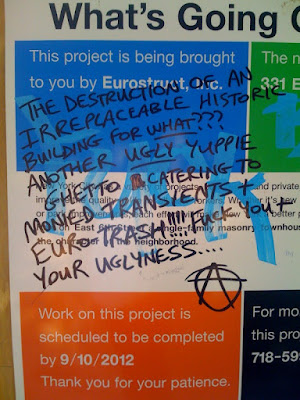 Here is David Schwimmer's East Village home
Posted by Grieve at 10:19 AM

Why so many entrances? There are four doors.

Maybe I don't understand urban mansions, but aren't there a lot of front doors on that thing?

can there BE any less plywood in front now?

The apple doesn't fall far from the tree.

The EV has lost it's soul. RIP.

My prediction: There's 4 doors because there are 4 apartments here, which will be sold individually, so Schwimmer Inc can make a lot of money by destroying affordable housing and historical buildings. fucking carpetbagger. He'll tell us the doors are service entrances etc.

At least it isn't one more of those glass and plastic buildings that begins to yellow after 5 short years. But I can't imagine he moves in now with the bad press (and awesome graffiti) around it. Can you imagine that guy trying to walk around the neighborhood? Oof.

I just clicked back to see what 331 used to look like. What a Motherfucker.

Which door is there a tiger lurking behind?

I think nygrump is on the money. Schwimmer will never set foot here. Maybe it was a last-minute plan to split up the place after all the bad publicity?

Goggla, I've been adamant from the start (and posting here accordingly) that he never had any intention of living here. There's no security border/fence that frankly any Hollywood type needs these days from the insane and empty. I don't know if the rent control laws allow him to NOT live in this place for a certain amount of time before he can then dispose of it.

@NYgrump - There were guys out there today drilling holes in the sidewalk for a fence. But I do think its correct that the doors mean seperate entrances

Hate to put a blanket on the haters here but a friend of mine did some work for the DS house and according to my friend he was the nicest and most down to earth guy. I'm not thrilled with the loss of the historic building but at the very least there was some effort made to "fit a new building in" with the rest of the block. Of course he will not live here year round, rich people have more than one home less you forget. He still works in the biz and will most likely spend time on each coast. Remember he did not displace 40 families or long term tenants like Kushner and Shaoul do weekly.

He may be charming, and not nearly as sinister as Kushner or Shaoul, but its still pretty decedent and arrogant to have a vision of downtown manhattan as an "east coast beverly hills" full of single family homes.

I live on the block, they were tearing the crap down at 7:30 AM! Wait til you see the next shot, I don't have the stuff to take the photo and send it but just you wait.....he now has the velvet rope look but with chains not rope! HA! I hope the trendy Wendy's line up thinking its yet another secret mixology bar. Oh yes he does live there, I've seen his Ross face twice & the trash from deliveries ect goes out every night, guess he can pay the fine.

"east coast beverly hills" The are many private homes in the EV, small townhouses that escaped being turned into multi-unit apartments buildings. Greenwich village townhouses are for the VERY rich and have been for a couple of decades now. Coops uptown are filled with lawyers and control freaks that have more rules and regulations regarding everything. People that don't want that to live like that have been house hunting downtown for years and now see the EV as a bargain compared to the WV. Manhattan as a whole is now price above the middle class after 12 years of Bloomberg and his London make over of our city. David S, at least is an actor and producer not a Bernie Maddof or some Russian billionaire.

i hope cool is drunk enough one night to tag the actual property and go to jail where he sort of belongs? 0:)

Yeah, there were always single family homes in Greenwich and East Villages. And they were originally for rich people. Let's not let recent history obscure the facts. This house is ugly, though.

GET OVER THE FUCK OVER IT PEOPLE, HE'S NOT SOME HUGE CORPORATION THAT IS BUYING UP PLACES TO KNOCK THEM DOWN AND SELL IT OFF. ITS HIS MONEY AND HIS PRIVATE HOME. THE HOUSE PREVIOUSLY THERE WAS NOTHING AT ALL SPECIAL AND WAS NOT LANDMARKED. IT SOUNDS LIKE A LOT OF JEALOUSY!