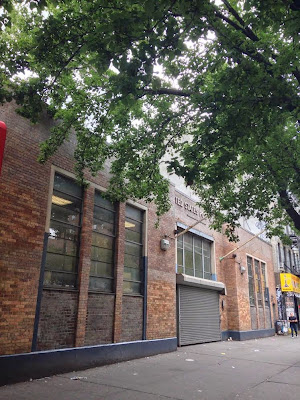 Signs arrived Friday at the former Peter Stuyvesant Post Office noting the start of asbestos removal from the building at 432-438 E. 14th St. 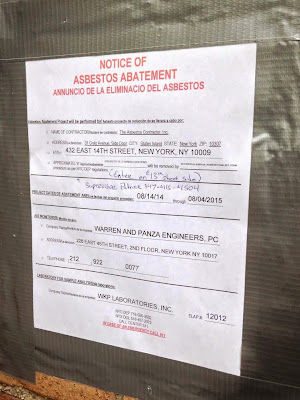 This Post Office branch just west of Avenue A closed for good in February. (The USPS is leasing the former Duane Reade at 333 E. 14th St. for retail services.)

Initially, word was that the USPS was unable to come to terms on a new lease with the building's owner. However, a rep for the owner, Benenson Capital Partners, told the Town & Village blog and the Save the Post Office blog that it was actually the USPS's decision to leave because of a desire to downsize.

Last fall, the Stuyvesant Stationery shop next door to the post office lost its lease and closed. In July, the 99-Cent Discount Center to the east closed, making for three consecutive, single-level storefronts sitting vacant.

To date, there's nothing on file with the DOB to suggest any demolition or new development here. 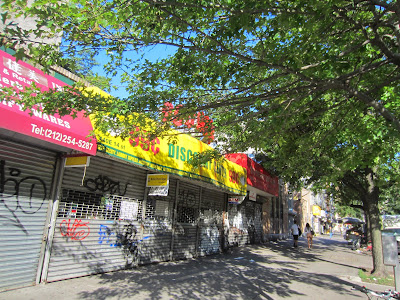 Asbestos abatement is often the first step before a demolition. Or, perhaps this is just for a conversion of the space to suit a retailer. Or, perhaps the landlord just wants to be proactive and clean up the place. Or, as several EVG readers believe, the three buildings will be taken down to make way for a retail-residential complex similar to what's coming to 500 and 538 E. 14th St.

First sign of more development on East 14th Street?
Posted by Grieve at 5:10 AM

If you have a favorite restaurant, store or service business in any such one story building in the neighborhood enjoy it while it last. These types of buildings are all doomed now that land values have exploded here. The saddest part of it all is not just the crowding of bigger buildings to come but the loss of small privately owned businesses which will never return. Unchain NYC!

yuck, lotsa change here. coupla weeks ago, i saw the whole southeast corner of e.14th & ave a - all razed, with just wood fencing. oh progress, it hurts. (i'm a first time poster, and i really should read egrieve more often. they do great work.)

i just noticed the southeast corner of ave a & e.14th street, all flattened! what will be put up?

i recently noticed the FLATTENED southeast corner of avenue a & e.14th street. i assume a tall residential bldg will come up.