Closing times for Shakespeare and Company and Kim's

By now you are likely painfully aware that Shakespeare & Company, 716 Broadway, and Kim's Video & Music, 124 First Ave., are closing soon. 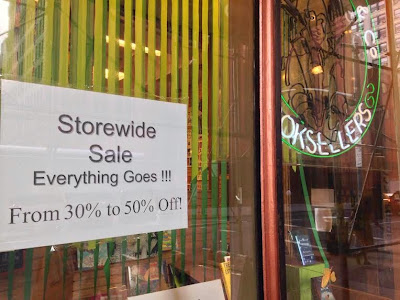 There have been several closing dates in circulation about the book shop that opened here in 1987.

According to a report at NY1, the store shutters for good after Sept. 6.

It's a familiar refrain among small retailers in the East Village: "The rent has gone up," says Margot Liddell, general manager of Shakespeare and Company Books.

"I've had calls from kids, from California, from all over the place that say, 'We've heard you're going out of business and its horrible and this was our home,' you know, so...'" Liddell says.

When Shakespeare closes, many people expect a national chain store to move into the space, fitting in with this stretch of Broadway.

Items are currently 30 to 50 percent off... we haven't been inside since earlier this summer, so we can't speak of any specific deals ... 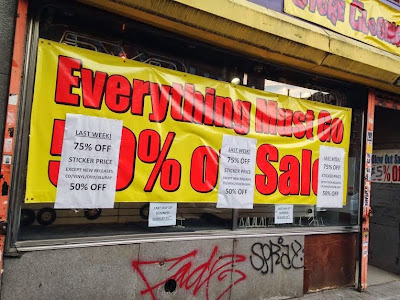 Kim's closes for good after the business day on Monday. New releases are now 50 percent off and everything else is 75 percent off.

We'll likely go back one more time, as depressing as the store kinda is now. Maybe pick up that (yet another) "Daydream Nation" reissue (we own it on cassette!) ... we might stare at that reissue of Ciccone Youth's "The Whitey Album," even though we sold it back once in like 1990. And there were a few other things too.

Shakespeare & Company space is for lease on Broadway

Listing for Kim's Video says space is 'ideal for Bank, 711, Starbucks'
Posted by Grieve at 4:49 AM

I went in to Kim's this week for my last time. I'd describe what's left as pretty picked over, but for 75% off you can afford to be a little less choosy (I grabbed a handful of 12"s). It is a bummer to see how empty the place is. They're also selling all the bookshelves for around $30, although a number of them had already been sold as of Wednesday. I'm honestly surprised they stayed open for as long as they did given that the sales have been going on for what seems like several months now.

I stopped in at Shakespeare & Company today for the sale. The selection was dull and sparse in my opinion. They are selling big bookcase-like tables in front for $5 each so that's something if someone has room for them.

I spoke to someone at Kim's on Monday night. Seems they aren't opening anywhere else and this is it. He said there was some talk of it at first but since nothing came up, it seems there wont be another Kim's. :(