#HandsUp #TurnUp rally winding through the East Village; report of one arrest 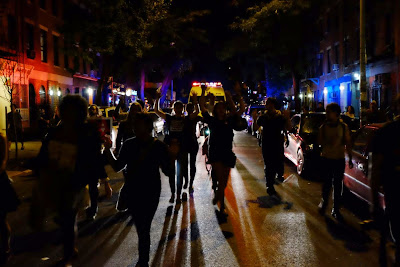 All sorts of reports coming in regarding the #HandsUp #TurnUp rally that started earlier this evening at Sarah D Roosevelt Park. The march is in remembrance of Mike Brown. 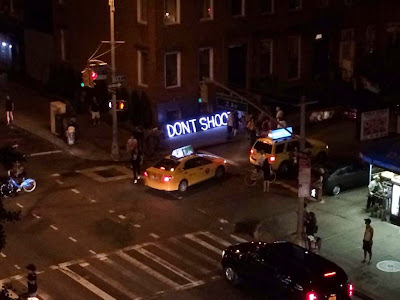 [Photo on 2nd Avenue via @alexisperrotta]

We're still sorting out everything… so far, there is a report of an arrest on Avenue A.

5-7 cops just piled on top protester in east village and arrested him in #NYC protest for #Ferguson pic.twitter.com/ZaZeY9eQ0k

Protest outside my window @visiitor: 5-7 cops just piled on top protester in #eastvillage and arrested him in protest 4 #Ferguson...

One resident figures there were 100-plus people "yelling 'no justice,' 'no peace' on East 6th Street. At least 40 NYPD with zip tie handcuffs too."

Here's video from East Sixth Street and Avenue B…

Here's another snippet of video via Grant Shaffer… 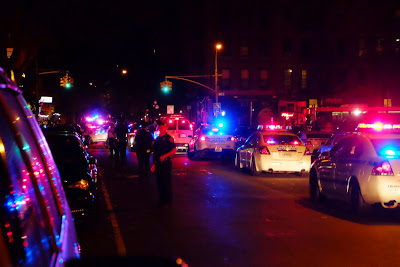 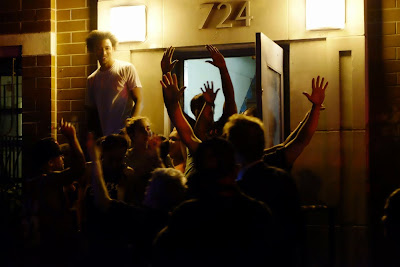 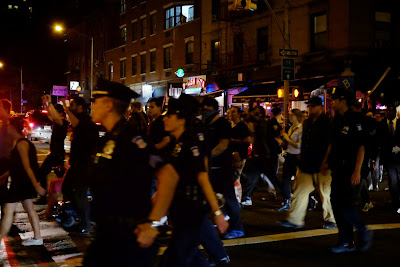 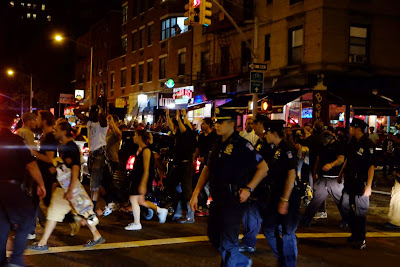 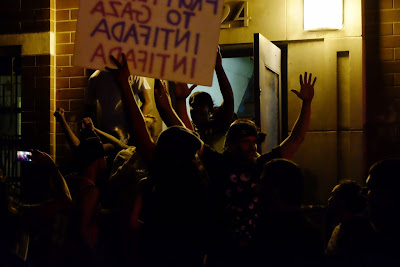 The rally has moved to Union Square … 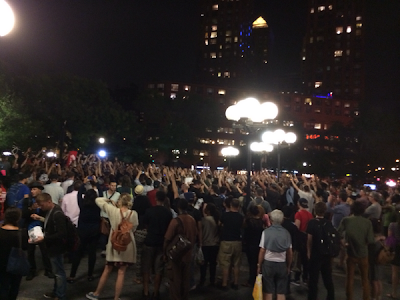 But.. but.. we've always been told it's ok to peaceably assemble, right? Oh wait, I forget.. we're in NYC so those kinds of silly notions don't apply to us.

What part of "Don't shoot" do the cops not understand?

Thanks so much for posting this so promptly. I've been trying to find info on the helicopter circling around and shouts heard from 9th street. You were the first place I turned!

I saw it and thought how thrilled all those cops must be to be getting more overtime... There were swarms of them, and lots of paddy wagons, too. I bet NYPD "antiterrorism" units are on it and jizzing all over themselves out of excitement.

Thanks EVG, first place I turned to.

the nypd seemed woefully underprepared for the size of the rally. it appeared that the police initially attempted to contain the protesters on east 4th street, between 1st ave & avenue A, but the number of protesters allowed the crowd to push on down the street & around the corner. it's not entirely clear that the police knew this was happening as the radio-cars & sirens didn't appear en masse until at least five minutes had elapsed from the first rallying cries.

Not all of the facts are in on what happened in Ferguson but who cares about that I guess...I know I'm in the minority here on this anyway but it's still a point worth raising in my humble opinion.

So that's why it sounded like the fall of Saigon in the sky above my building. I thought the damn NYPD chopper was going to come through my window.

wow! i live on 6th but my open windows face out to 7th and we could CLEARLY hear the chanting. amazing what is going on right now.

Any arrests served these protesters right. Don't these people know about the "Free Speech Zones" set aside for such purposes by the heavenly Mike Bloomberg?

Saw it too when I was leaving a restaurant at 6th street. Didnt know it was the "hands up don't shoot"-movement at first.
Nice and important protest without violence.

Gojira, Saigon didn't fall, it was liberated. Which side were you on?

I believe in peaceful protest it's crucial to a free society. However don't be surprised by "arrest were made" showing up in reports. There are always a few people that want more than a peaceful march and hope for conflict.

Walking through the residential streets at 10 pm in large groups, blocking traffic and shouting can hardly be described as a peaceful protest. If you do not need to work in the morning, you may want to think of those who do. If you do not have a care in the world other then walk around shouting about some events far away you do not know first thing about, do it in your own back yard, not in mine.

Please refrain from using the term 'paddywagon'. Its an ethnic slur against Irish Americans. Thank you.

Looks like the police had a riot last night on 10th St:

WARNING GRAPHIC LANGUAGE IN VIDEO: Police say the man was busted on E. 10th St. near Ave. D, saying he was engaged in 'tumultuous behavior' while demonstrating over the events in Ferguson, Mo.

August 21, 2014 at 10:06 AM: When you say far away you mean Staten Island or Hartford CT? You might prefer North Korea, where you'll never have to be inconvenienced by people expressing anything. Since the cops and DAs routinely lie, they have lost all legitimacy in what they say. THEY created that situation with their lies and blue wall of silence.

I thought you were talking about one of the sports bars.

I guess everyone who witnessed this rally and has posted comments thus far has decided to blithely ignore the protesters' refrain of the "No justice, no peace" chant: "F&%k the police!"

It's hardly a peaceful protest when certain people try to incite a riot.

"Walking through the residential streets at 10 pm in large groups, blocking traffic and shouting can hardly be described as a peaceful protest."

Quite correct! What you described is an average weekend night with young drunks overrunning the East Village ... though to be fair it usually goes from 10pm to 4:30am.

Some people are looking for trouble.