Reports: Katz's sells air rights, but will remain in its home of 126 years

In case you missed this story from Friday … Katz's has sold its air rights. However, the 126-year-old deli isn't going anywhere. Just getting some new neighbors, mostly likely.

BoweryBoogie and The Lo-Down first reported on this Friday morning. 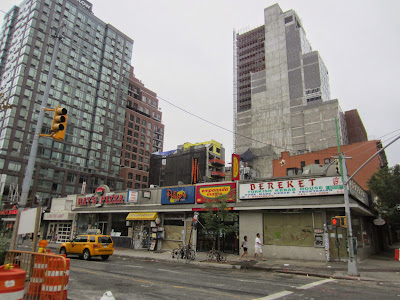 First, part of the Katz's statement via BoweryBoogie from co-owner Jake Dell:

The most important thing is that the future of Katz’s is secure — at the end of the day, no developer can ever come in and knock us down to put in a high rise. At no point will anyone value the corner of Houston and Ludlow for anything other than Katz’s Delicatessen. A year after our 125th anniversary, this will help ensure that we can see our 150th, and hopefully many more to come.

As for the rest of the block… BoweryBoogie reported back in March that Ben Shaoul was close to buying that L-shaped parcel of single-level businesses. Several of the restaurants have already cleared out, including (sob) Bereket.

You can get a choice seat to this likely incoming development from one of those new condos right behind Katz's.
Posted by Grieve at 11:01 AM

The title of the artice is a little misleading since though Katz might be 126 years old,it used to be across the street till the mid 1930's. It was not in the same location. Between 1900 and 1915, there were many restuarants that were similar to Katz that served the recent Russian and Jewish groups that migrated to what is now called the lower East Side. These restaurants served as a meeting place for hard working men at that time. All of the restaurants back then had the same system of ticket at the door and pay as you leave. It is an accounting method, similar to a movie theater with ticket at the door and ticket taker later.

this is one place in NYC that I would not miss. and now that i know they sell their "air rights" I feel justified. Let the Lower East Side turn into the Upper East Side around them. Gross.

Seriously, couldn't they have facilitated an arts complex above them? What if CBGB reopened on the second floor? How wild would that have been? You enter Katz's to get to CBGB and have a post-show pastrami sandwich at Katz's.

Katz dropped the ball on this one.

Wow. These are some pretty strange comments. A neighborhood institution is committed to staying and these are the comments? It boggles the mind.

Katz is a business that's looking to remain a business...good for them

Yeah good for them that they are contributing to the gentrification of the neighborhood by selling their air rights to developers who will make it yet another place for the rich to live, wonderful, just wonderful. Heaven forbid Katz's sells the rights to artist investors.

CBGB has more than enough money to reopen on the second floor - think how cool that would be. Instead the second floor will be inhabited by an asshole or two or three who has and wants NOTHING to do with the art or culture of the LES. But hey, he/she can always come down in his/her pajamas to get a pastrami on rye from good ol' gentrification Katz's!

Arrggh. I lost my ticket and had to buy Lobster Joint's air rights too.

Katz's, as a business, and their air rights, are unrelated.

If the owners of Katz's could sell the air rights, that means they own the property. (Right?) So when they say "at the end of the day, no developer can ever come in and knock us down to put in a high rise," that was never a real possibility (as long as they didn't sell).

Why are they selling the air rights now? My guess is they need the cash, which perhaps means the business isn't doing so well.

Regarding the air rights, it's possible they were sold to Magnum, or someone who may one day sell them to Magnum, in which case, Magnum could build directly over Katz's.

All of which is to say, I don't think Katz's future is made secure by this sale.

Shockingly I actually agree with shmnyc for once.

For those thinking that Katz's did wrong by not selling to an artist group or whatever, do you know if any artists or groups tried to buy? That's a nice sentiment, but you can't sell to someone who isn't buying. Its like yelling at people for not eating in a restaurant when they're not hungry.

Haven't been there in years, don't like what they sell but this place is nostalgia for many people from the suburbs which make the trip on the weekends. At least for the near future there will be one place on this block representing the neighborhoods history. Like it or not there is nothing to stop the Houston from being lined with hotels and luxury housing. Better here than in the residential blocks above Houston.

I just don't know what to think.

I am really disappointed to hear this. Katz' wasn't in danger of being displaced given that they own the building. Selling the air rights was a way for them to cash in bigtime as a wave of hypergentrification sweeps across the neighborhood. That's their right, of course, but don't act like this was a heroic effort to save the joint. Just say you wanted to set your family up for life and couldn't pass up the money.

Katz's could've called on artists to buy the air rights.

They certainly didn't put out a public call for artists. I doubt they put out a private call.

Be their devil's advocate all you want but fact is there are PLENTY of artists with money who would've jumped at the chance to buy the air rights. Instead Katz's sold out to big developers.

It just feels like selling out :( Doesn't sit right at all.

Couldn't Moshe sell the air rights too? And there's a 2nd floor there that CBGB could reopen at too.

I suggest that all of you learn what "air rights" actually means. It's not a second story over a building or even a dirigible hanging over head. Google can be very informative.

Anon 10:28 - Sure, just a taller, uglier condo somewhere else down the block.

katz's is not katz's anymore - so there's nothing to "feel good about" in the fact that the "institution is still standing" ... an institution to who? the people who made it an institution? NO. is it paying any homage to them? NO. it'll be there as this "institution" as some of you call it for a late night treat for the frat boy trust fund babies whose daddies get them jobs at goldman, or the girls whose daddies pay their rent and can afford the $3K/month studio rents of the buildings that will be demonizing the air rights above the "institution" ... the fact that more development crap is going up but that "katz's is staying (yay!)" is just a facade ... wake the fuck up people ... don't get too excited now ... I'd rather they just demolished the building, along with the rest of this island and call it something else, as nyc is no longer nyc