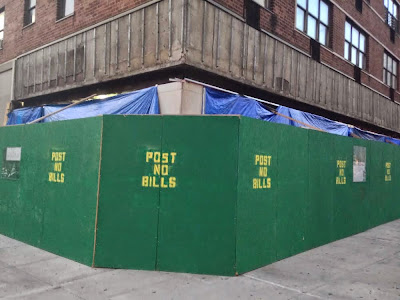 Last month we noted that the Starbucks-owned Teavana was opening a location on Broadway and East Ninth Street.

We hadn't walked by this northwest corner for several weeks ... and, as the photo shows, the plywood is up and the gut renovation is on for the specialty tea and tea accessory retailer.

In December 2012, Starbucks bought the Atlanta-based Teavana for $620 million.

No word on an opening date yet for Teavana.

Last December, Silver Spurs got rent-hiked out of its 34-year-old home here.

Starbucks-owned Teavana coming to the former Silver Spurs space on Broadway
Posted by Grieve at 4:55 AM

I hope they tank.

I was weren't to damn lazy I would create a map of the city putting green dots at all the corporate owned stores and restaurants (chains) that now line most of the cities avenues. Overlap this with the city pre-Bloomturd to really show what we have lost. Again I am too lazy but anyone interested please go for it.

Nygrump - that's what the public library is for- and they are not bums.they're domicile challenged

I loved that place. Their food was consistently excellent and service was always exemplary. Sad to see it disappear.

I don't know anyone in my circle of acquaintances who would go and drink tea anywhere outside of their own apartment. There's a place on my block that specializes in tea. Every time I walk by, there may be a maximum of 3 or 4 people in there.