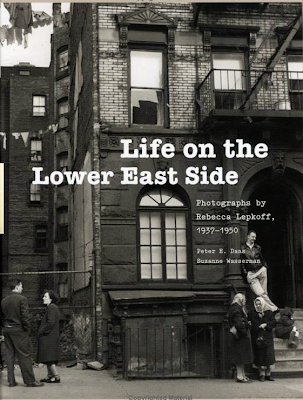 She split time between NYC and Southern Vermont the past six decades.

Lepkoff was born on Aug. 4, 1916, in a Hester Street tenement on the Lower East Side, "the neighborhood that would become her photographic muse," according to her obituary in The Commons, a local Vermont publication.

Her husband of more than 70 years, Eugene, survives her. "She lived a long and incredible life," said Jesse Lepkoff, her son. "She was an amazing artist, mother and person."

The Lo-Down interviewed her in October 2011.

Lepkoff purchased her first camera, a Voigtlander, with money she scraped together from working as a dancer at the 1939 World’s Fair and turned her ravenous eye to street photography. Her photographs capture the bustle of the LES in the 1940s and 50s, depicting loiterers, butchers, shoemakers, mothers and especially, kids. As a modern dancer who took classes with Martha Graham, Lepkoff must have identified with the frenetic energy of the streets — a different kind of contemporary ballet.

"I went outside and at that time, people lived in the streets — everything happened in the streets," Lepkoff recalls. "People would go out and sit with baby carriages. They sat on the stoops."

"People ask me — how did you know what to take? I didn’t even have to think. I just went outside, and there were the streets of my mother, of me, and whatnot. Very alive, full of activity, with people."

Sorry to hear. She took some incredible photos.

Rebecca will be missed.Thanks to Shell Sheddy, I was in several photography shows with Rebecca, Silvianna Goldsmith, and Marlis Momber. Rebecca was an amazing, accomplished woman. I am very happy that I had the opportunity to share some time with Rebecca.

Wow. Rest in piece sweetheart & thank you for the images. Good run!

This is a wonderful book (part of my NYC archive) -- it's sad that almost nothing in any of her photos remains today. Her shots are of a lost city, beautiful and compelling....