Report: Golden Cadillac will reopen as Boilermaker next month on 1st Avenue 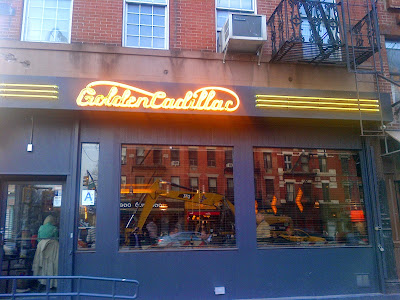 The owners have revamped the space for another retro creation, Grub Street reports.

The retro cocktail list cribbed from Playboy's Host and Bar Book has been overhauled with a selection of actual boilmakers, including one combining Old Grand-Dad bourbon and Brooklyn Lager and another that teams up Ramazzotti amaro and Victory Storm King Stout. There will be four cocktails on tap, including a Zombie made with three kinds of rum ...

Boilermaker is expected to open next month.

End of the road: Golden Cadillac closes tomorrow night (29 comments)
Posted by Grieve at 5:00 AM

Cool! I'm going to go in there and order a shot of whiskey and a pint of beer, drop the shot glass into the pint, and drink it! Oh yeah!

Great a place that serves sweet drinks with a toxic mix of booze surely to make 20 somethings lose their minds and lunch, woo.

I'm not sure why this concept will work over the previous one.

The good news is that with their special loyalty card you get a free liver replacement for every hundred boilermakers you drink, happy hour specials not included.

After the first drink, who needs a concept?

Why not call it "Quick Liver Toxicity" or ""Rapid Dementia Onset" or "Shared Public Vomit" or "Casual Acquaintance Violence". No seriously, this will be a great asset to the community and create jobs.

This shit is corny. Your themes ain't gonna fly here.

I feel sorry for the owners of this place. They are completely clueless about the types of places people will visit in this 'hood. I have to hand it to them for their imaginative themes. Their concepts are visual and would make great fashion shoots. But when translated into bars, and with their not very sophisticated touch (evident in Golden Cadillac which I visited only once and it was awful), it just doesn't work.

A new low, a new level of obnoxiousness. Back in the day, in the greasy mill towns where I grew up and attended collewdge (to get some knowledge) one drank the occasional boilermaker with a kind of hushed reverence, stopped at two of them, and walked home. Quietly!

I notice there's no mention of anything superfluous like "food".

Gojira makes an excellent point.
Will they be pairing those boilermakers with the bacon-wrapped lamb chops or deviled quail eggs? Will they be renaming the Caddy Burger, the Boiler Burger?

Another song and dance to the CB3 to get a full liquor license on how the business in this space will be a bar-"restaurant". And now that they got their full liquor license, the façade drops and it's really just a bar. And as per usual, CB3 are clapping their hands for being so entertained with that song and dance. How stupid and gullible do you have to be to be on the liquor license committee at CB3 or at SLA? Boca Chica lasted 15 years. Golden Cadillac couldn't last 15 months. All these concepts are just for that 15 mins. of 'fame'.

Let's hear it for the Boilermakers! From purduesports.com:

As everyone knows, Purdue went down to Wabash last Saturday and defeated their eleven. The Crawfordsville papers have not yet gotten over it. The only recourse they have is to claim that we beat their 'scientific' men by brute force. Our players are characterized as 'coal heavers,' 'boiler makers' and 'stevedores,'" wrote a reporter for the Lafayette Sunday Times of Nov. 1, 1891.

The nickname stemmed from the nature of a Purdue education. As a land-grant institution, the college, since its founding in 1869, had schooled the sons and daughters of the working class for occupations that were considered beneath the high-born who attended liberal arts colleges such as Wabash.

You guys are missing the point, no real neighborhood person would step foot in a themed place like this but plenty of tourists and newbies will.

"Russ said...
I'm not sure why this concept will work over the previous one."

the owners have a long lease I assume and little to no experience in operating a bar or restaurant, probably guys that made money doing something like banking or suing for vaginal mesh victims. Anyway they want to brag to their buddies about their cool bar and all the hot babes that go there and how easy it is to get laid. This new breed of restauranteurs are spending a fortune to prove something but will eventually shut shop when one of them blinks and wants out of these money pits.

Thanks, Anon 12:28! Finally, a LOL during an otherwise laugh-less morning!

Ok whatever, but where's that nice sign gonna go?! Just cuz the bar sucked doesn't mean the neon did!

And the playboys that will be patronizing this boilermaker crib are mermaids, I mean merman, I mean, merbros.

In the late 70s and early 80s, this bar was called "First On First". It was the most integrated bar (ethnically, socioeconomically, gender and sexual orientation accepting) I've ever set foot in. It was a microcosm of the glory days of the East Village. It was a sad day when the owner retired and moved to Florida. None of the joints following ever got the neighborhood.