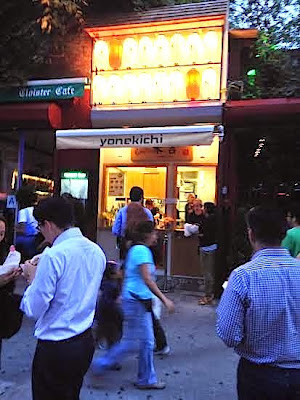 Yonekichi had its (soft) opening yesterday at 236 E. Ninth St. between Second Avenue and Third Avenue. The tiny restaurant's specialty: the rice burger.

Here's a preview via amNY:

Yonekichi serves their crisp rice buns with a variety of made-to-order fillings: ginger mujifugi features sweet bites of pork shoulder ($8) and the saikyo salmon includes a fresh fillet marinated in miso ($9). For a more traditional burger, the tsukune, a chicken meatball patty topped with shishito peppers ($7.75), most resembles your average quarter pounder. Vegetarian options, like the Kinpira made of sautéed lotus root, carrot, sesame seeds and togarashi ($6.50), are also available.

Yonekichi's menu also includes Furi Furi, Japanese for "shake shake," which are crispy, thick-cut potatoes topped with your choice of salt, pepper, yuzu or wasabi, and served steaming hot, ready to be shaken in their thick paper bag for optimal seasoning coverage.

While amNY appeared to like the rice burgers ... the Daily News did not.

"This is a dough-zaster," said one member of the News’ formidable Taste Kitchen. The expert had imagined that the rice buns would be thinner, and therefore, crispier.

Instead, he found himself eating too much of the unhealthy Asian staple.

"This is just a thick layer of bland rice," he said. "And it keeps breaking up, like those mini-sandwiches from 'This is Spinal Tap.'"

And it’s not even homemade! The rice bun is made off-site then combined with Yonekichi’s made-to-order umami-bomb fillings, which are far more impressive than their container.

You can check it out yourself... they are open from noon to 10 p.m. 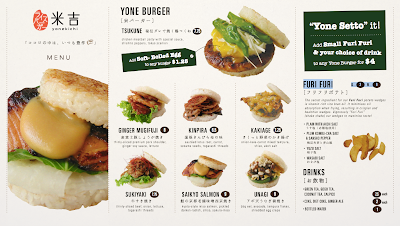 Email ThisBlogThis!Share to TwitterShare to FacebookShare to Pinterest
Labels: Yonekichi

I wish they'd put a sign up that read "Please don't park your ass on our neighbors stoops and have a picnic." A lot of the people who get food from these table-less restaurants set up shop on our stoops making it difficult to get in and out of our buildings. They literally use it like a table, condiments, water, all spread out. One couple even brought a blanket. And they get mad if you ask them to move as was the case with one couple so I marched like Godzilla through their meal. Dinners over!

Isn't Yone the word for the female parts in the Kama Sutra?

Stoop squatters. It's the equivalent of parking your car in someone else's drive way in the suburbs.

The Spinal Tap thing is actually a selling point for me. "I've been working with this rice bun for a half an hour now and I can't figure it out... it's a complete catastrophe... I'll rise above it, I'm a professional."

And I thought all those stoops were put in by the city just so that we could enjoy picnics in front of other people's homes, thanks for clearing that up.

I'm waiting for the obligatory comment from someone who moved here last month, telling me to move out of the city if I don't like people setting up a restaurant table and candelabra on my stoop.

So rice is an "unhealthy Asian staple" according to the Daily News?

What a bunch of idiots

Sitting on stoops is a time-honored NY tradition. It's more of an old-school thing though. Not using streets/stoops is a newer, middle-class thing.

@10:56 Agreed. But usually it's the people who live in the building or their visiting friends that sit on the stoop.

"Sitting on stoops is a time-honored NY tradition."

Yes, it is a custom for the people who actually LIVE in the building. See Godfather II, the scene after Vito takes out Dan Fanucci:

Vito Corleone: [picks up baby Michael, kisses him, holds him] Michael, your father loves you very much. Very much.

True but resident's neighbors and friends used stoops not foodie tourists. I found a nice open pizza box and two bottles of Snapple just o my building's stoop the other day, there is a part across the street with tables and benches????

Why stop there? Why not do laundry in someone else's building too?

I used to be neighbors with that grease stain known as Pommes Frites. One morning I went out to my bike parked on the sidewalk to find that someone had repurposed the saddle as a table for their catsup and mayo dips. I was more appalled than annoyed. Because ha ha, joke's on them--the saddle is the thing on the bike that goes up the butt! I guess when you are drunk you are not bothered by such trifles.

Coming to a stoop near you: Goopy egg slather!

I hate when people eat on the stoops because I can't park my CitiBike there!!!

It's New York City! Things change! Get over it! Or move! Haters! I'll keep my DJ booth on that guys stoop if I want! Maybe if you ate a delicious biscuit you wouldn't be so cranky!

Wait, what were we talking about?

Word is born 3:06. I would want to order one with the egg on top, but considering that there are no tables to sit and eat at, how the hell could I manage a crumbly sandwich while standing in the middle of a busy sidewalk, egg yolk dripping everywhere, napkins flying every which way. For me this could only end in angry tears and frustration. Street food is not for me apparently. God I wish I wasn't such a prude!!!

There is a reason why a slice of pizza is the true NY street food. Watch the first 5 mins of Saturday Night Fever if you don't know what I'm talking about.

I like the place that serves soup in a colander with no spoon and napkins. That's the best meal to eat leaning against a mail box. All these new people make New York so cool. Everything is new. New is always better. Just ask ad agencies?

Soup? Soup is sooooo early this afternoon! The best new place is that milk crate on 6th street. The lady mixes up a milk shake in the crate then throws it in your face. No cup. It's so new. New is good because it's not old. I paid $198 for that shake. Mmmmm! Foodies rule!

My favorite new restaurant is called D.O.A. It's a new seafood restaurant where live crabs are served fresh from the chest cavity of a dead body pulled from the Hudson. It's more of an experience than a restaurant. All the boys in salmon pants are shrieking about it.

There are very few Japanese left in the East Village. And whomever remained behind goes to one of Yagi's joints.

I admit I've only been here for three decades, but are people actually saying that "stoop squatting" by strangers is a phenomenon which has increased in popularity more recently? That seems pretty revisionist.

The phenomenon is the people moving here now having little respect, regard or consideration for ANYTHING.

Why do eating places always gunk up the food with horrible annoying additions? I guess because making plain food taste good is something beyond their capabilities, so they have to disguise it...