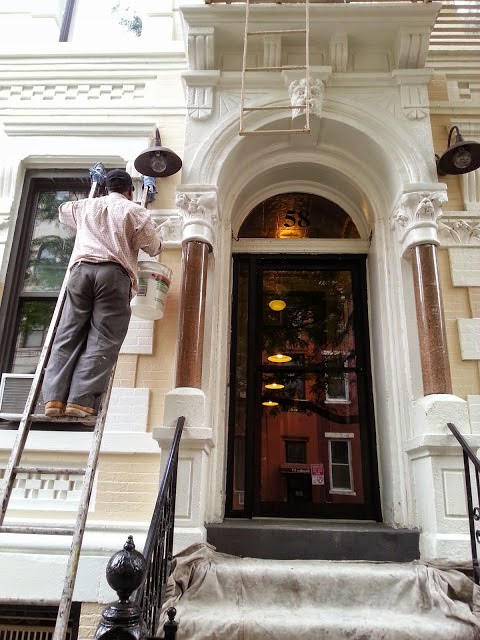 More than a year has passed since we last looked at "East Village3" aka "The #EV3" ... aka 50-58 E. Third St. where many longtime tenants lost their leases when new owners (GRJ, a fund co-founded and co-managed by brothers Graham and Gregory Jones) bought the walk-up building for $23.5 million in the spring of 2012.

EVG reader Yenta Laureate, who took the above photo, has been keeping tabs on the buildings between First Avenue and Second Avenue.

Yenta notes that the first and biggest of the downstairs duplex apartments at No. 58 rented for $11K a month earlier this summer. Aside from six bedrooms and four bathrooms, the unit features a private courtyard.

And how about the renovations in the buildings?

"The quality of the work and materials is quite good. All bricks have been properly re-pointed and mortared. Marble steps were replaced. I'd call the attention to detail unusually painstaking and quality oriented," Yenta said. "One cornice still needs doing but they seem to be seriously researching how to do that best. In some ways it is both a preservationist and luxury project about a type of comfortable authenticity."

"Which in no way justifies the misery they cause the few existing tenants who remain or abates their overall impact on the neighborhood."

By comparison, Jared Kushner's 170 E. Second St. is a "newer building with far better bones, but he is not doing this type of quality work."

The 'East Village3' is ready for you; for that 'Industrial Chic feel'
Posted by Grieve at 5:07 AM

I pass this place regularly. They are constantly having "open houses" which don't seem very busy. Often, they have people stationed at the sidewalk, trying to rope passersby into checking out the apartments. Often, they tack up tacky homemade xerox flyers at the corner lamp post advertising the place. At one point, they even set up one of those small portable "red carpets" for an opening event which nobody attended and which quickly collapsed in the wind.

Their whole operation does not feel very sophisticated, for the prices they are charging. And it does not appear that very many of the apartments have been rented. Yenta's take on this seems awfully kind to them. My impression is that the whole thing is a bit of a fiasco.

The issue of impact in going so upscale in a walk-up neighborhood building raises the question of profitable marketing. The question as to whether it is actually successful or more profitable to do so nay not be an obvious proposition. It's why Kushner goes for cheaper renovations.

In 2001, I rented that apartment (the one that is shown on the streeteasy link and well before it was a duplex). At the time, I thought I was getting ripped off paying $2400 for a 2-bedroom. A sad ha.

Not-so-real estate bubble is already seriously poppin' over in London UK. Gonna get sadly interesting REAL quick when it starts to go here.

While 11k is insane, it is a 6 bedroom with 4 bathrooms. So, $2k each if you don't share a room. Not awful, not great either. Essentially a dorm, if you ask me. The idea of living with 5+ other people makes me shiver.

Lot of care taken, but I'm not loving' the manila folder tan. And what's with the "crab-shack" front lanterns?

Everyone should be so lucky to live in a Jones Brothers building.

Do you remember what this place was like before they bought it? The entire neighborhood should be thankful.

Just ask some of the older tenants who live here. I'm sure they are thankful for the measurable improvements to the buildings. If not, they're crazy.

I walk by here everyday. They are the most beautiful buildings on the block.

Looks like a multi-level apartment that includes the illegal basement? As per the note in one of your earlier posts:

[Meanwhile, we also hear that tenants who live in basement apartments were given notice that they had 10 days to vacate their homes ... given that that space was zoned with the city as storage/commercial space ... and their apartments were now deemed "illegal dwellings."]

@Anon 3:35
"Do you remember what this place was like before they bought it?"

I live across the street. I wonder if anon at 3:35 actually walks by or works for the company.

1]the quality of renovations look wonderful. very nice attention to detail. all landlords should be so conscientious.

2] i think the neighborhood misses most of the residents who were evicted to make room for these dorm/apartments-most were long term residents, apparently middle income singles, couples and even some families that worked in NYC and were part of the neighborhood society.

3] the new residents all appear to be 20-something. i can't say that i follow them around to detail their activities but i see large groups of people coming in and out of the buildings at night, apparently coming from or going to party-esque destinations. i assume they work somewhere but wonder how they afford these rents on what is likely entry-level pay. perhaps they're students.

when i moved here, this was the music block. guitars and drums being carried around, art portfolios, actors, writers.

the other day i heard some of the new blood talking about trading bitcoins.

There will be a breaking point when landlords will have to stop renting 5 bedroom apartments to man-child renters who will not keep it clean and quickly trash the new Home Depot kitchen cabinets. When its time to evict these bros will the security cover the amount of repairs? I truly hope these schemes fail and fail quickly to stop the monopoly board takeover of our neighborhood.

The multi-level duplexes include the "illegal" basement area which was renovated. Only the easternmost apartment has access to the "patio" however. And it is priced in theory to reflect that "amenity."