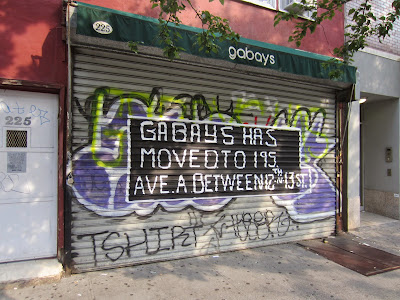 Work permits at the old storefront at 225 First Ave. between East 13th Street and East 14th Street reveal the new tenant — a Checkers. 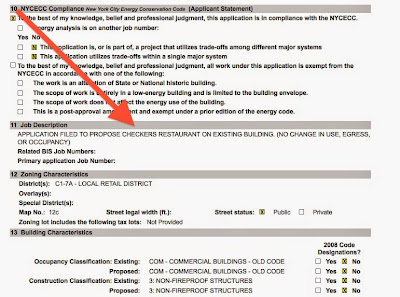 In April 2013, Crain's reported that the fast-food chain was going to add another 22 restaurants in NYC by 2015.

A Checkers opened in Tribeca in 2009. There's also a location in Hamilton Heights.

Here's the official Checkers story via the company website:

Checkers & Rally's restaurants were born out of the idea that a bland and flavorless burger was downright bad and that Americans everywhere deserved a better tasting burger — one that was unexpectedly bold, made-to-order and priced at a value that was hard to beat. Founded by experienced foodies with a renegade spirit, both the Checkers & Rally's unique double drive-thru concept, with its over-the-top checkerboard squares, chrome styling, red neon signs and of course the food, was an instant hit. These two new burger experiences were hot, fresh and served with a smile. People were hooked, and the world of cookie cutter corporate burger establishments was about to change.

Arlene Spiegel, a restaurant consultant, said this to Crain's about Checkers:

"I see them filling the space between quick-service-restaurants like McDonald's and gourmet burger concepts," said Ms. Spiegel. But she cautioned that it may be difficult for a suburban drive-thru concept to adapt to an urban market.

Previously on EV Grieve:
After 45 years on 1st Avenue, Gabay's Outlet is on the move
Posted by Grieve at 11:14 AM

"...experienced foodies with a renegade spirit" - I can't even begin to express the vapidity, inanity and sheer stupidity this quote emits, much less the nausea it induced in me. Yet another waste of space; and for something that sounds like a copycat Johnny Rockets, which is not the most elevated dining to begin with. SO renegade.

Save us from "experienced foodies" and "renegades". Please. Someone.

Who is this "America"?

I am an American and I don't want any burger, "bland" , "bold", or otherwise. Leave the flesh on its rightful owner, the cow.

the bros gotta have their burgers

I read something about meat consumption and higher brain development I guess they weren't including Checkers in that research.

When is NYC gonna pass a bill limiting the amount of chain businesses from opening here like Chicago?

the checkers in tribeca already delivers bland tasteless burgers to the EV.

1:28pm Checkers TriBeCa does delivery all the way to the EV GTFOH.

These food chains that want to push their way in with plans to set up dozens of stores (dunkin donuts, 7-11) understand the suburbs, not New York City. Why would NYC need 2 dozen of your burger shops? We have subways, buses and cabs and if a restaurant is great, we can get there wherever it is in the city. Calm the fuck down with these fast food chain invasions - we don't like it and you lose us before you even get us.

If there is such a thing as an 'experienced foodie with a renegade spirit', I'm pretty sure that what they would like burgerwise is two dozen DIFFERENT local burger places with different owners, different burgers and different atmospheres. Not a chain of sameness.