Surprise! Police Commissioner not a big fan of 'celebrating graffiti' 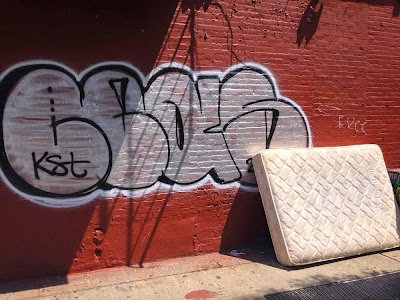 Police Commissioner William Bratton responded to the Museum of the City of New York's graffiti-art exhibit "City as Canvas."

"I find it outrageous that one of the city's museums is currently celebrating graffiti and what a great impact it had on the city," Bratton said Monday during a meeting with Wall Street Journal editors.

Mr. Bratton further objected to "having New York City school kids at the impressionable age of 12 years old walking through looking at this stuff and having it advertised as 'Isn't this great?'"

And the museum's response?

Susan Henshaw Jones, City Museum's director, said the show is intended to show how graffiti became an art form, not to glorify vandalism. "We are not in the business of trying to encourage children, teenagers, grown-ups or elders to do graffiti," she said.

Read the article here. (Subscription required)
Posted by Grieve at 11:24 AM

Email ThisBlogThis!Share to TwitterShare to FacebookShare to Pinterest
Labels: graffiti

If any of these kids have brains they will realize that just about every bit of culture in a museum is dead as in 6 feet down, buried and over. Unfortunately the dumb fucks that still tag our blocks will not see this show or have this revelation.

I'm thinking of setting up a "selfie" studio next to a graffiti wall and charge $5 per hit. Tourists will line up to take their own pictures with their own phones and I rake in the dough. Speaking of dough maybe an artisanal dough nut shop, I've seen foodies part of NYC's great "food tourism" line up for hours for fried batter and sugar.

Gags me to say but I am with the commissioner on this one. To me the writing on a rest-stop bathroom wall tends to be way more artistic and insightful. Graffitti today seems like nothing more than a type of weird apocryphal self-promotion that makes no sense to 99.99% of people who see it.

Most graffiti today is the same dynamic as a dog marking its territory - self affirmation. Its not the Graffiti Hall of Fame, which I recently saw has been painted over.

Bratton says his new strategy is to choke hold the taggers to death, sending a powerful message to would-be vandals.

Don't think we're not on to you, Anonymous commenters!

so good graffiti only? and advertising. some of you commenters are just hypocrites and the others just feel good about hating anything and everything to feel some sort of worth. go white-wash your fence and hang out at your booze-free non-threatening only-food serving hang outs.

"go white-wash your fence and hang out at your booze-free non-threatening only-food serving hang outs."

Tom Sawyer is a favorite of mine and drunks piss me off. Graffiti is dead.

"We are not in the business of trying to encourage children, teenagers, grown-ups or elders to do graffiti," But that's what were doing anyway.

we all communicate for self affirmation.. i prefer graffiti to egotistical comments everyday telling the world what to do and not actually doing anything to achieve that world.

graffiti is garbage. it destroys the neighborhood.

"nyhump said...
we all communicate for self affirmation.. i prefer graffiti to egotistical comments everyday telling the world what to do and not actually doing anything to achieve that world."

And graffiti doesn't say "look at me, you have no choice I'm all over your building wether you like it or not" graffiti is 100% ego out of a can.

Destroys your neighborhood. Brightens mine.

I highly recommend the exhibit. All of the work was donated by the late Martin Wong 20 years ago. He lived in the East Village. I am not sure how much longer it is on display. I think it ends sometime in August.

Like it, dislike it, love it, hate it, or give no fucks about it, graffiti is an art form.

The legality or illegality of it is irrelevant.

I did notice that some arseholes COMPLETELY covered over Xemay's sign with graffiti. Great job of sticking it to the Man*.

*the Man in this context being the young guys who opened Xemay and grew up in Chinatown.