Reader report: The Wash House has apparently closed; space is for rent 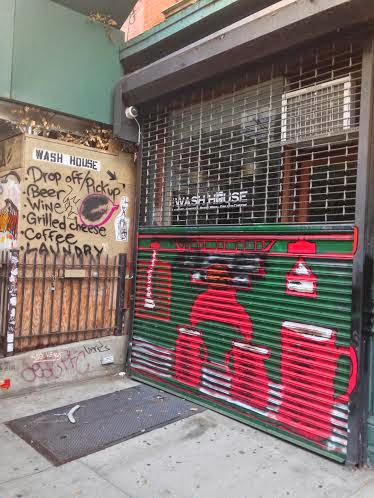 The Wash House, the laundro-bar that made a big splash when it opened earlier this year, has apparently closed, per a tipster.

It is/was the place at 44 E. First St. between First Avenue and Second Avenue where you could have some beer or wine or a grilled-cheese sandwich while someone washed your clothes in the back.

The place certainly had some public relations power behind it, landing coverage everywhere from NY1 to CNN. (Apparently all that press didn't convert many viewers into customers. And their PR power skipped over neighborhood outlets.)

The Wash House website is no longer active ... and they were closed during stated business hours yesterday ... and there haven't been any updates on their social media accounts since May.

Meanwhile, the space has been on the market. Current asking rent is $4,500 a month (plus $165,000 key money), per the NYCRS site, which also notes that the space is "Eligible for full liquor license in 4 months."

As BoweryBoogie pointed out back in February, there was "vehement opposition from the 1st Street Block Association and CB3 District Manager Susan Stetzer" over this beer-wine application.

However, SLA Chairman Dennis Rosen approved the wine and beer license subject to a zoning resolution with the DOB.

Previously on EV Grieve:
A 'laundry bistro' in the works for East First Street

Oh, that laundro-cafe concept really happened on East 1st Street
Posted by Grieve at 4:50 AM

Everything on Bowery Boogie is vehement opposition.