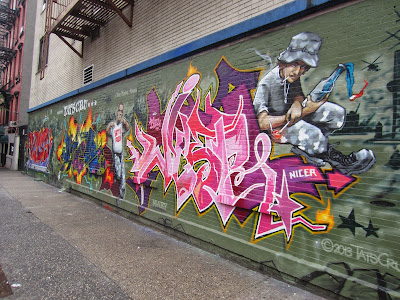 Famed graffiti artist Davide Perre, known for his murals on city walls worldwide, was arrested this morning after allegedly hitting a man in the face with a beer mug in an East Village bar, police sources said.

Perre, 39, of Brooklyn was charged with felony assault after the victim was sent to Bellevue Hospital with blood gushing from his head.

Perre and his twin brother, Raoul — members of the famed TATS CRU from the Bronx — were at the Ace Bar on East Fifth Street when an argument erupted with two men. One of the men made comments about David’s wife and his brother’s girlfriend, and was then smacked.

Lesson 101: You NEVER make derogatory comments about another patron's wife or girlfriend. That's not the way to get old in the EV. You're welcome.

Right, Walter. Eyeroll. How about you NEVER assault someone simply because they were talking smack. A real MAN would have just told him he was out of line then walked away.

I don't think the guy who got hit will ever make comments about anybody's wife again. Lesson learned.

Sometimes you need to hit people just don't understand the term back off. We weren't there. The smack talking could have been going on for a while.
Did he the beer mug . Not really.

Felony assault is a serious charge. He could get 4-7 years for this.

Not one person has asked how the beer mug feels about all this.

If this is true, maybe this guy won't be so fast to talk shit about women again.

I am amused by all you internet tough guys. I'd love to see how you'd act in real life if someone insulted "your" woman. Hahhaha!

Can't feel any mercy for a thug who used a mug... But even a fist fight over some drunken yappin' is the sad state of the East Village today.

Guys who are afraid of getting hit always say its cowardly to fight. How about watch your mouth like a grownup should?I work in nightlife in the area and I can assure you. The new people in this neighborhood can be shockingly rude now thay they think they cant get hit. This seems like a fair reprisal, maybe you are just afraid of standing up for yourself and resent people who do? Do they make you self concious about your fear? Or maybe you are a girl, in that case, not to sound sexist or presumptious (pro equality here), but you could never understand the unspoken laws of manhood. When i mean law I mean like the law of gravity. It is human nature, and just how men dont understand the ways in which women usually hurt eachother verbally as opposed to physically, you couldnt understand this, because it would not be a part of your human nature, the way confrontation is natural to many men.

I broke a kids jaw for it in highschool, so there, dont worry internet snitches, this "internet tough guy" already did his time.