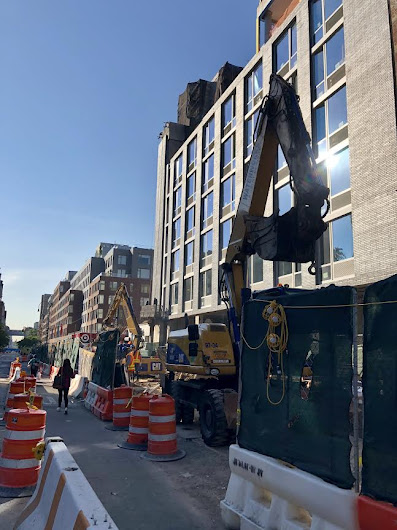 Last night, a handful of local elected officials along with reps from the MTA and the city gathered at Middle Collegiate Church on Second Avenue for an L-train shutdown Town Hall.

Aaron Gordon has a nice recap at Gothamist today. Here's an excerpt specifically related to my post yesterday about 14th Street and Avenue A serving as the main staging area for the upgrades to the Sandy-damaged Canarsie Tunnel:

Multiple residents voiced a belief that asbestos was being improperly disposed of in dumpsters near their apartments, something New York City Transit president Andy Byford assured them isn’t happening. He promised to post something on the MTA website detailing exactly what materials are being disposed of and that asbestos is not one of them, which requires completely separate disposal teams and procedures due to its high toxicity. “If you all really think that,” he said, “then I think we owe it to you to get something up on the website to get your mind at rest.”

Several citizens also expressed concern about the “considerable truck traffic,” as one put it, that has already inundated the neighborhood. Another said she’s experiencing more headaches and sore throats than usual and cannot open windows out of fear construction dust would enter her apartment. Byford pointed out they simply cannot do the work without trucks bringing materials in and out through the East Village shafts — which will become elevators into the 1st Ave L station after the shutdown is complete — but did offer that at the peak of construction, 30 trucks’ worth of debris will come out of the tunnel per day and 10 will be going in with new material. 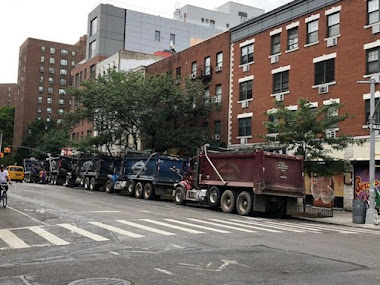 Byford also said that although the work inside the tunnel will be 24/7 to try and wrap up the project as quickly as possible, surface-level construction will not be all hours of the day.

Meanwhile, as Streetsblog reports, Community Board 6 members said that "the current plan for next year’s L-train shutdown will fall considerable short of what will be needed to efficiently move the 400,000 daily commuters who will be affected." This link goes to the Streetsblog piece.
Posted by Grieve at 1:00 PM

The AC units in those buildings are going to suck all that toxicity right inside. I feel so badly for these people.

Let me give you an idea on how long this is really going to take. Where I'm from in Queens, the Lefferts Blvd station upgrade took four and 3/4 years. This was started in spring 2013 and was finally completed last year in November and all they did was redesign the station, the stairs and added an elevator. There isn't even any goddamn wifi or even bland commissioned art at this station either.

Now with the Canarsie Tunnel, who the fuck does the damn MTA think and especially that nice bloke Andy Byford think they are fooling? Especially since the way they have worked without warning and with reckless abandon. The tactics employed by the MTA and the contractors, you would think they took some pointers from Croman.

Here's a prediction as Andy gets his little bugger aides to update the goddamn MTA website, this is going to take 5 to 6 years (I am being extremely kind). And they might not even get started in April considering that NOW they will have to assess the environmental hazards and the effects it will have on the neighborhood (which is already happening).

Everything about this and every word they say is a lie. They expect the general public to be desensitized to it by now.

Fuck the MTA. The worst fucking transit system in the universe.

Another thing, Mario's son, who runs this shitshow, thinks he deserves your trust and your vote this November. Well, this stupid dick has no problem getting proactive and utilizing his power when it came to opening the 2nd ave line for his New Years Eve party and opening the new Tappan Zee bridge way too early to chaperone Manifest Failure Hillary over FDR's car. Maybe this swine can cruise over to 14th and 1st in that jalopy and try to get these contractors to hurry up (but first find a way to prevent toxic emissions from under).

Between the construction of the condos that started 4 years ago and this round the clock war zone, replete with 24/7 flood lights, cement truck-size air vacs, drills, and semi’s crashing over the metal street cover all night long, there is no quality of life worth living on 14th and A. Not to mention the cancer dust. And we have 3 years to go. My poor dog has a heart condition and I guarantee you this project will put her under. Not to kention how it is acrewing up my 7 and 5-year olds sleeping pattern. And for what ? To have a Target and a Burberry next door? boring. #stayedtoolateattheparty

I ride my bike through this mess every day. It's extremely dangerous, but I don't have much of a choice. I'm putting this out there now so when I wind up in the hospital or dead, you guys can put this in the papers. Maybe it will help then. Good luck and Godspeed.

@Greg I know how you feel. I was riding my bike through the 14th St. War Zone the other day and cars and buses were coming in each direction, and no one wants to slow down. There is no way to pull over so my only solution was to ride down the middle and hope no one would run me over. The only thing more terrifying is riding a bike thorough the tunnel on Park Avenue just south of Grand Central Station and hoping to make it out alive, something we used to do as kids late at night when traffic was lighter. This was long before brains were invented. Perhaps you could get a Sharpie and write your name and birth date on your arm like they tell people to do in hurricanes. Good luck and I hope to not see you in the papers.

Wonder if this half-decade long repair will impact rental prices in this area? Even tho NYU destroyed the neighborhood with their tax free Dorm, Inc culture? I wouldnt pay $3500 month for a shoebox full of asbestos and no transport system in quasi war zone, even if a trust fund was picking up the tab