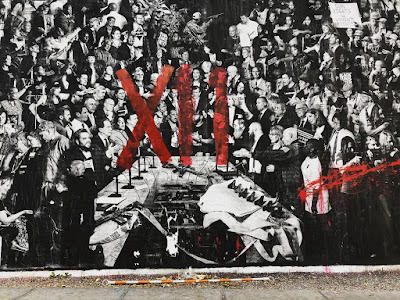 Another addition arrived over night at “The Gun Chronicles,” JR's mural featuring images of 245 Americans who represent various viewpoints on the gun debate.

On Oct. 28, someone added an 11 — for the victims in the Pittsburgh synagogue massacre — in red paint here on the Bowery mural wall.

And now an X was added to make the 11 a 12 — representing the number of people gunned down in Thousand Oaks, Calif., Wednesday night.

JR collaborated with Time magazine for this interactive special report on gun violence in America.

Thanks to EVG regular Lola Sáenz for the tip.

At least the new tags match the original work. Someone should put up a gaint digital counter next to the National Debt clock to remind people how bad this is. This was the 307th mass shooting in the US this year, 12,509 people have been killed in shootings so far. When you include suicides by gun that number more than doubles. Since John Lennon was killed, more than 1 million peope in this country have been killed by guns. It is way past time for this country to take some real action to fix this disease of mass violence.

There should be another X and another I.

But all gun deaths should be accounted for. Especially the kind that happens daily in poor neighborhoods.