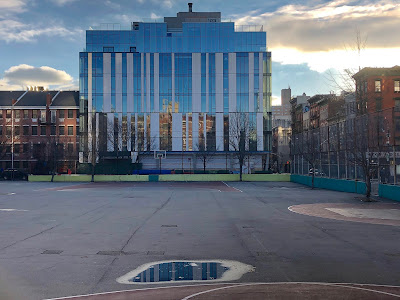 Here's 150 Rivington, the 7-story glass condoplex with 45 one- and two-bedroom residences at Rivington and Suffolk... a corner better known as the longtime home of Streit’s Matzo Factory from 1925 to 2015. 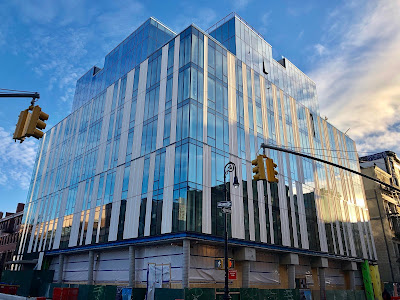 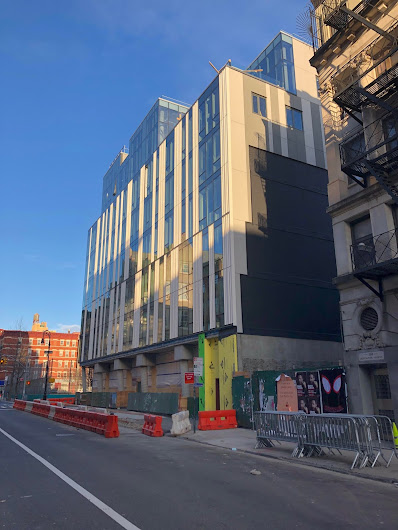 The last time we checked in on the site — back in March — workers had recently reached the top level. Now it's looking close to completion, clad in floor-to-ceiling glass and 265 custom-cast panels.

The 150 Rivington website lists five residences still available (sales started in 2016). As for the interior, Christopher Robbins at Gothamist toured the new condoplex back in October. (Link here.)

The family-owned business sold its original factory to Cogswell Realty in January 2015 for a reported $30.5 million.

Streit's, who left the LES in 2015, now operates out of more modern facilities in Rockland County. (Here's a story about how they're doing today.)

And here's the slot for the future new ABC No Rio next door... 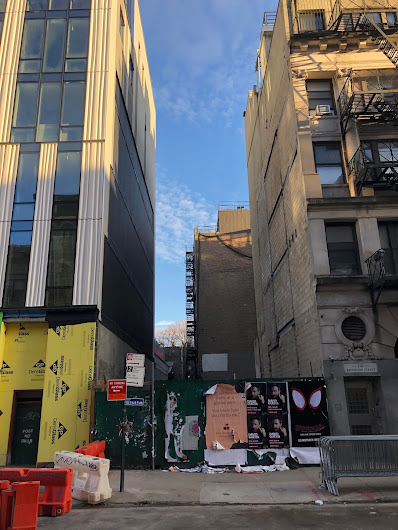 The city signed off on the new building permit in mid-November, and construction is expected to start in early 2019.

At ABC No Rio's last HardCore/Punk Matinee on Rivington Street (for now)
Posted by Grieve at 6:30 AM

this building looks more commercial than residential at least from these pictures. My first impression was government building, as in law enforcement. Hell with context I guess.

How do you open the windows? The problem with all these new buildings is that at most they have tilt in windows that only open a few inches, and some dont seem to have windows that open at all. I like to throw open my windows to iare the place out, especially on a nice spring day or summer night. Breathing in all of that recirculated air just isn’t very pleasant or healthy,

Talk about ugly and out of place... with all the charm of a detention center. What is our Community Board thinking?! Nuthin'. Absolutely nuthin'. They're too busy being stupid.

The local community board can be blamed for many issues. But in this case, what role did the community board play? The Streit family sold the building to a private developer. The family was not pushed out by high rents. The plans did not need approval at the local level, solely the department of buildings.

Please explain the role of the community board in a private sale in this case please. (And please be specific, and not make vague and bombastic accusations.)

I stand corrected... if that's the case. But not on the bombast and accusations. They have contributed to the decline of the EV along with our elected pols... and I dare you to challenge that!