Report: By Chloe joining Chase in the former Coffee Shop on Union Square 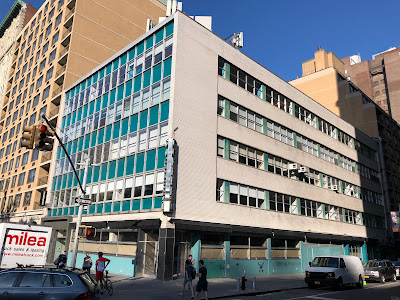 ICYMI: Expanding vegan chain By Chloe will open an outpost at the former Coffee Shop space on Union Square West later this year.

Here's more on what to expect via Eater, who first reported this news:

At the Coffee Shop space, the interior will pay homage to the nostalgic diner by including “intimate round banquette seating” and “a nod” to the restaurant’s original neon sign, according to By Chloe marketing material.

But its a move that still may not sit well with longtime fans of Coffee Shop. The restaurant was a nostalgic, distinctively New York place, while By Chloe is part of a huge company that’s in part flourished due to colorful food and spaces made specifically with social media marketing in mind.

By Chloe will have company in this space at West 16th Street. The Coffee Shop will be divided into four spaces. One space is reserved for a Chase branch, as Jeremiah Moss reported last fall.

The Coffee Shop closed last October after 28 years in business. The rising cost of rent and wages were reportedly behind the closure.

Email ThisBlogThis!Share to TwitterShare to FacebookShare to Pinterest
Labels: By Chloe, The Coffee Shop

All hail the New Corporate Chains!

I gave up reading at "will pay homage to."

Funny "The restaurant was a nostalgic, distinctively New York place" I remember when Coffee Shop opened and thinking it was a Disney version of a NYC coffee shop but one made for models and being "seen". I guess if you last long enough you look old school and "authentic" to some people. In a rare no cranking review I have eaten at the By Chloe place in Chelsea and liked what they serve but my one complaint is they don't accept cash which should be illegal in our city.

No cash is a way to control the type of customers you attract into your store. There is so much discrimination in our world... add to that... financial.

"spaces made specifically with social media marketing in mind."

Seriously, a restaurant DESIGNED for instagraming or tweeting the food?

No thanks; I'm holding out for restaurants designed to serve really good food, and whose existence does not depend on "social media" (which could more accurately be characterized as "anti-social" media).

Establishments that do not accept US currency or cash should be illegal by law in NYC just like they are in New Jersey. It is totally discriminatory and clearly discriminates against the City's poor people especially minorities.

Maybe they can just "serve" plastic replica versions of their foods, since apparently nobody wants to EAT the stuff, just photograph it.

Well, when Coffee Shop first opened it was called Jason's Coffee Shop, and was a classic ("Cheeburger, cheeburger") Greek diner.

Supposedly, By Chloe will accept cash, but they can't make change. (I'm scratching my head at the logic of that one, too.)