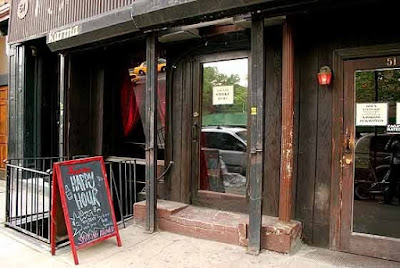 Karma Lounge, the two-level hookah club on First Avenue between Third Street and Fourth Street, announced yesterday that the venue had permanently closed.

Ownership shared the message on their website and social media properties:

After 21 years, Karma has closed. On behalf of everyone at Karma, we thank the community, our neighbors, our patrons, and our employees for the years of support and wish everyone the best of health and happiness in the future. Thank you for being a part of our family.

Karma, which hosted a variety of DJs and comedy nights, had not reopened since the COVID-19 PAUSE went into effect back in March.

And it was one of the few places in the city where patrons could still legally smoke cigarettes inside the establishment. As the Times reported in 2010:

Opened in 1999 as a hookah bar, it was able to get the cigar-bar exemption because it served alcohol and derived at least 10 percent of its income from tobacco products by the cutoff date in 2001.

The happy hour crowd was always fun and eclectic. I made some wonderful friends here... This one hurts.

I met my hunky husband here in 2010. We've been married for seven glorious years now and counting. This sucks. NYC is dying.

The last legal place in our neighborhood where you can have a drink and smoke a cig - without leaving your seat. I'll miss it dearly.

This place was fun in the 00's. Did not like the crowds in later years, when the bros have discovered hookahs.

any one know about dba

This really hurts, I met some great people there.

I liked their soup of the day -- Jameson's!

Oh man, my husband and I formed our entire relationship at this bar. He even gave me my engagement ring there. Makes me real sad.

Thoughts out to the long term staff, hope JB, Denz, and David are all doing alright.

Man, I’ve had so many nights I don’t remember there. Met some interesting folks, sucked face and got my hookah on.