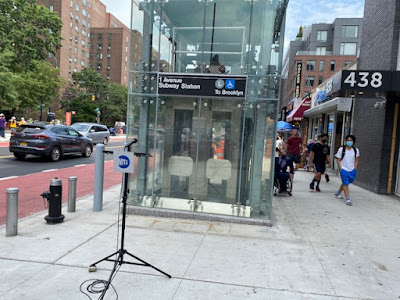 MTA officials yesterday officially unveiled the two platform-to-street ADA elevators on either side of 14th Street near Avenue A that are now servicing the L-train stop.

In announcing the completion of this project, MTA officials, along with accessibility advocates, used the moment to call upon the federal government to provide funding to help secure the MTA’s 2020-2024 Capital Plan ... and bring more accessibility across the system.

Officials have stressed that the MTA needs $12 billion in federal aid in order to maintain operations through the end of 2021. A coalition of 13 advocacy groups sent a letter to Washington lawmakers today calling on them to make transit funding the "highest priority" in Congress's next Covid-19 relief bill.

"We have fought hard alongside transit advocates to make accessibility a top priority at the MTA and remain committed to doing so," said Janno Lieber, president of MTA Construction & Development, at the announcement. "As historic as the 2020-2024 Capital Plan is, I want to be very clear: it can't happen the way we originally envisioned it, unless Congress steps up and provides us with meaningful aid."

The MTA says they are currently losing $200 million a week in revenue from fares, tolls, subsidies and COVID-19-related expenses. (This Streetsblog post from yesterday explores the MTA's financial options — none of which are too good.)

Meanwhile, here's a look at the elevators now in operation on both sides of 14th Street... 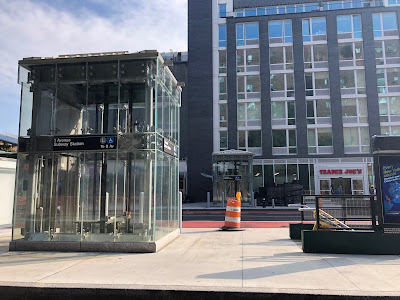 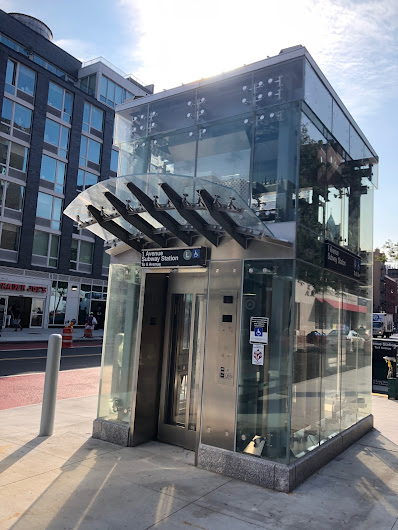 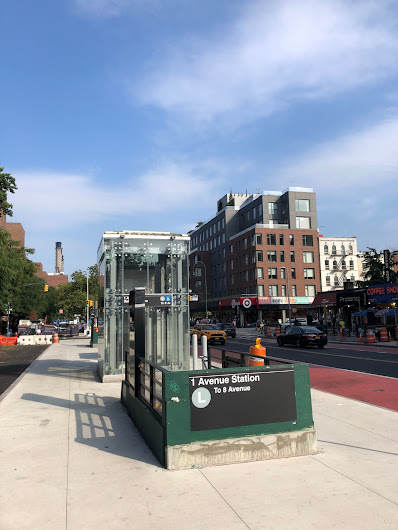 In addition to the elevators, the First Avenue L stop now has four working entrances — two at First Avenue and two at Avenue A.

The work — part of the Sandy-damaged Canarsie tunnel rehabilitation — officially began along this corridor between Avenue B and First Avenue in July 2017. Since that time, both Target and Trader Joe's have opened.
Posted by Grieve at 6:05 AM

The MTA claims to be losing money due to covid-related issues.
What they won't tell you is the massively-inflated costs of running the MTA compared to the costs of running these systems in other cities.
The New York Times (hardly a libertarian publication) had a good piece on this, and there are other information sources.

Washington should just say no.

I love this neighborhood but sorry all that glass makes me nervous. We probably can't have nice things don't you remember.

These elevators are most important for parents with strollers, and ambulatory people; it's a nice thought that they also happen to be ADA-accessible.

Lol they should have just kept that elevator simple. All that glass ain’t gonna last in the EV!

seems some east village residents simply have low expectations. Instead resigning yourself to not having nice things, question why we can't!

@12:48pm: We can't b/c there's always some mouth-breathing moron who thinks its FUN to destroy things, that's why. Vandalism is fun to some people. I think they're sick and should be locked up, but NYC is letting people out without bail, so they can immediately re-offend.

Worse, our culture now disdains concern for ANYONE else - the culture of "me, me, me" that is selfishness personified, and which doesn't bother to consider the needs or concerns of others. It's always someone else's issue, or problem, or mess. Just like the crusties - they make a mess, but they never clean up; b/c it's someone else's problem to clean up.

lots of reactionary nonsense in these comments.

great that these are finally open. really hope against all odds that we can get congestion pricing and more speed cameras to help buoy the MTA

When I was first in the city, there was an underpass in this station so that you could cross between the eastbound and westbound platforms. Naturally this was a security risk they sought to mitigate and they changed this line at this station to its present format.

Nowadays, they would have surveillance in such a setup, but what's done is done.